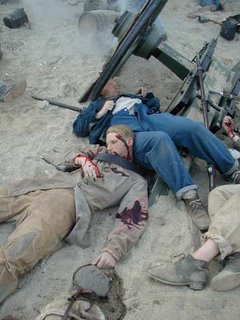 Confederate & Union Dead at The Crater

Near Petersburg, Va.- Union forces under the command of Maj. Gen. Ambrose Burnside suffered more than 4,000 casualties early today in what is being called the Battle of the Crater. The battle, part of the nine-month siege of Petersburg, was the brainchild of Union Lt. Col. Henry Pleasants, a northeastern Pennsylvania mining engineer and commander of the 48th Pennsylvania Volunteers.

Before the war, Pleasants had worked for the Pennsylvania Railroad and was associated with digging a lengthy tunnel through the Allegheny Mountains. He has also worked as a mining engineer, most recently in Schuylkill County, PA.

According to sources that wish to remain anonymous, Pleasants had suggested to his superiors that the strongly entrenched Confederate lines near Petersburg could be breached by digging a mine and placing explosives directly underneath the Confederate position. The plan was unanimously approved by Gen. Burnside, Brig. Gen. George G. Meade and Lt. Gen. Ulysses S. Grant.

Pleasants' men apparently began digging the mine on June 25. He was afforded little help by skeptical Army engineers, but devised successful methods for ventilating the shaft and disposing of the dirt during the digging. 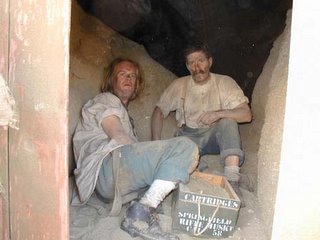 Working for less than a month, the experienced coal miners from the Schuylkill County area completed a 510-foot tunnel to the Confederate position, which was on a ridge known as Elliot's or Pegram's Salient. At the end of the tunnel, the troops dug a 75-foot shaft underneath the salient, where they placed 8,000 pounds of gunpowder. The powder was ignited shortly before 5 a.m. this morning. One Union soldier, speaking on the promise of anonymity, described the scene: "Suddenly the earth trembled under our feet. An enormous mass sprang into the air. A mass without form or shape, full of red flames, and carried on a bed of lightning flashes, mounted towards heaven with a detonation of thunder."

"It spread out like a swarm, like a huge mushroom whose stem seemed to be of fire and its head of smoke. Then everything appeared to bust up and fall back to the earth in a rain of soil mixed with rocks, beams, timbers, and mangled human bodies, leaving in its wake a cloud of white smoke, which rose up higher than I could see, and a cloud of gray dust, which fell slowly towards the earth."

Another soldier described it as a "tremendous blast which cleft the hills beyond the lines, a large column of earth and smoke shot upward, the sides of it flashing out sparks of fire. It seemed to hang for a moment in mid-air, and then, hurtling down with a roaring sound, showers of stones, broken timbers, and blackened human limbs."

The blast created a crater that measured about 170 feet long, 70 feet wide and 30 feet deep in places. The Confederates lost 278 men as a direct result of the explosion. Many other Confederate troops were seen running from the area immediately after the blast. This huge gap had been made in the Confederate network of trenches. 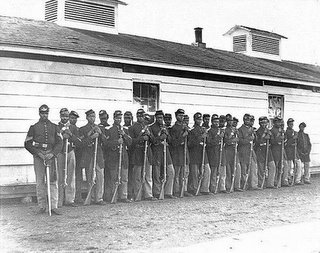 4th U.S. Colored Troops, supposed to be first in today

Gen. Burnside's plan had originally called for the 4th division, a division of black troops under the command of Gen. Edward Ferrero to rush through the gap created by the explosion and take the heights overlooking Petersburg. Gen. Meade changed the order of battle after becoming concerned about possible criticism should the 4th Division fail in their first combat action and suffer high casualties. At the last minute he ordered Burnside to select another division to make the initial charge, and was backed up by Gen. Grant.

Burnside selected by lottery the 1st Division led by Gen. James Ledlie, described as the most unfit and drunkest of Burnside's division commanders. Ledlie's troops, with their commander drinking rum a safe 400 yards behind the line, rushed toward the crater and, instead of moving around its edges toward Cemetery Hill to exploit the breach in the line, entered the crater in mass confusion.

Confederate forces recovered from the initial shock and opened up with artillery fire into the crater with deadly effect. Confederate Gen. William Mahone organized a counterassault that occupied the rim of the crater, where his troops fired into the mass of Union soldiers. The gap in the Confederate lines had closed. Soon, the Union soldiers were ankle deep in blood, with severed limbs and bodies stacking up and adding to the congestion. Bayoneted rifles were hurled like javelins, and grenades were lobbed into the Crater, with devastating results. By 1 p.m., the battle was over. Gen. Grant was quoted after the battle, calling it "a stupendous failure."  ¶ 2/23/2006 10:07:00 AM

If you have a history of illness that is difficult to recover, maybe our next article will help you to recover

It is great to have visited your website. Thanks for sharing useful information. And also visit my website about health. God willing it will be useful too

Your post has many detail information. I read all of your article and I genuinely like it. Thank you for discussing this great post.
obat keloid
obat ginjal bengkak
obat thalasemia
obat benjolan di kepala
obat benjolan di payudara

I can only express a word of thanks. Because with the content on this blog I can add knowledge I, thank has been sharing this information. Do not forget to visit our website to share information and knowledge about health.|
cara Mengobati Benjolan Di Kelopak mata |
Obat sakit tumit di apotik |
Cara Mengobati konka hidung bengkak

I can only express a word of thanks. Because with the content on this blog I can add knowledge I, thank has been sharing this information. Do not forget to visit our website to share information and knowledge about health. |
Obat Borok Bernanah |
Cara Mengobati Lymphadenitis
Cara Menghilangkan Sekelan |
Cara Mengobati Radang Telinga

I can only express a word of thanks. Because with the content on this blog I can add knowledge I, thank has been sharing this information. Do not forget to visit our website to share information and knowledge about health.
khasiat de lemon
Cara Menurunkan Lekusot tinggi
de lemon original
Cara Mengobati Kesrek

I can only express a word of thanks. Because with the content on this blog I can add knowledge I, thank has been sharing this information. Do not forget to visit our website to share information and knowledge about health. |
apotik qnc jelly gamat pangandaran |
gudang agen resmi QnC Jelly Gamat |
Cara Mengobati kanker payudara |
OBAT BATU GINJAL ALAMI |
obat payudara bengkak |
obat penyakit dompo herpes

Before you enter the small print of various sorts of computer science assignment help you would like to know what's an assignment in computing . Basically, a computing assignment isn't very different than the other academic assignment paper you've got addressed till date. the sole difference is that you simply got to stress more on the codes and flowcharts instead of writing chunks of words within the paper.