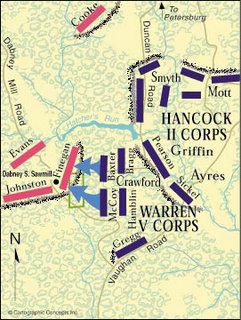 Union and Confederate forces around Petersburg, Virginia, begin a three-day battle that produces 3,000 casualties but ends with no significant advantage for either side.

Dabney's Mill was another attempt by Union General Ulysses S. Grant to break the siege of Petersburg and Richmond, Virginia. In 1864, Grant and Confederate General Robert E. Lee pounded each other as they wheeled south around the cities. After a month of heavy battling that produced the highest casualty rates of the war, Grant and Lee settled into trenches around Petersburg. These lines eventually stretched 25 miles to Richmond, and the stalemate continued for 10 months. Periodically, Grant mounted offensives either to break through Lee's lines or envelope the ends. In June, August, and October, these moves failed to extricate the Confederates from their trenches.

Now, Grant sent cavalry under General David Gregg to capture a road that carried supplies from Hicksford, Virginia, into Petersburg. On February 5, Gregg moved and captured a few wagons along his objective, the Boydton Plank Road. He found little else, so he pulled back toward the rest of the Union army. Yankee infantry under General Gouverneur K. Warren also moved forward and probed the area at the end of the Confederate's Petersburg line. The Rebels responded by moving troops into the area. Skirmishes erupted that evening and the fighting continued for two more days as each side maneuvered for an advantage. The fighting surged back and forth around Dabney's Mill, but the Yankees were never able to penetrate the Confederate lines. The Union suffered 2,000 men killed, wounded, or captured, while the Confederates lost about 1,000. The battle did extend the Petersburg line a few miles to further stretch Lee's thin lines, but the stalemate continued for six more weeks before Grant's forces finally sent Lee racing west with the remnants of his army. The chase ended in April when Lee surrendered at Appomattox Court House.  ¶ 2/05/2006 07:54:00 AM