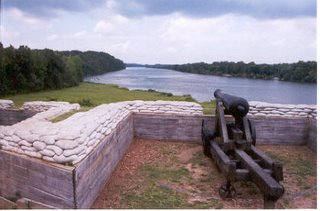 One day after the fall of Fort Henry on the Tennessee River, Confederate General Albert Sidney Johnston, commander of Rebel forces in the west, orders 15,000 reinforcements to Fort Donelson. This fort lay on the Cumberland River just a few miles from Fort Henry. Johnston's decision turned out to be a mistake, as many of the troops were captured when the Fort Donelson fell to the Yankees on February 16.

During the fall and winter of 1861 to 1862, the Union army and navy penetrated through Kentucky and into Tennessee. Led by General Ulysses S. Grant, the Yankees were gaining crucial advantages by controlling parts of the major rivers in the upper South. Johnston sought to stop the bleeding of lost Confederate territory by strengthening the garrison inside Fort Donelson. In retrospect, his mistake was in not providing enough support to Donelson. Johnston wanted to buy time so he could gather his forces from eastern Kentucky and Tennessee to Nashville, which lay south and east of Fort Donelson. If Johnston had concentrated his force at Donelson, he would have had a significant advantage over Grant. Instead, Grant surrounded the fort and sent a squadron to attack from the river. On February 16, the Yankees cut off the fort from the south and forced the surrender of 15,000 Confederates.

After the fall of Fort Donelson, Johnston gathered his remaining forces to northern Mississippi. On April 6 at Shiloh, the western armies clashed in one of the most destructive battles of the war. Johnston was killed in the Confederate defeat.  ¶ 2/07/2006 08:01:00 AM