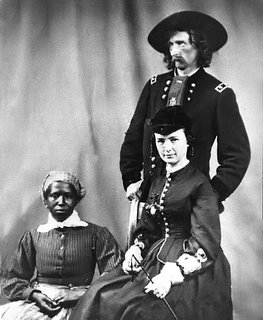 Union General George Armstrong Custer marries Elizabeth Bacon in Monroe, Michigan, while the young cavalry officer is on leave. "Libbie," as she was known to her family, was a tireless defender of her husband's reputation after his death at the Battle of the Little Big Horn in 1876, and her work helped establish him as an American hero.

The two met in November 1862 at a party in Monroe. They courted while George was on winter furlough. After he retuned to service in 1863, Custer became, at 23 years old, the youngest general in the Union army. George and Libbie continued their correspondence, and when he returned to Monroe that winter, their relationship intensified. George recognized that Libbie's good judgment balanced the young general's brash and impulsive behavior. They were engaged by Christmas.

The bride wore a white satin dress for the nuptials, which were held in Monroe's packed First Presbyterian Church. They honeymooned in New York, where they visited West Point, Custer's alma mater. After spending time in New York City, they settled in Washington and the attractive couple soon became darlings of the social scene. While her husband was in the field, Libbie worked to advance his career by hobnobbing with prominent Republican politicians. Her influence with some prominent members of Congress was helpful, and possible crucial, for Custer's promotion to major general on April 15, 1865.

After the war, Custer became a lieutenant colonel in the downsized postwar frontier army. On June 25, 1876, he and the 210 men under his command were wiped out by Lakota and Northern Cheyenne Indians at the Battle of the Little Big Horn in Montana. Libbie spent the remainder of her life building Custer's reputation and defending his actions during his last battle. Not until after her death in 1933 did the first iconoclastic biography of her husband appear. The enduring legend of George Custer was due in large part to the tireless efforts of his widow.  ¶ 2/09/2006 06:08:00 AM