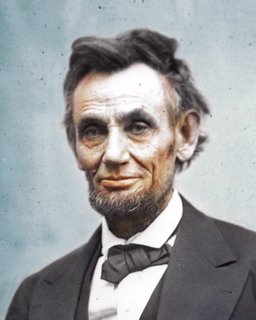 President-elect Abraham Lincoln leaves home in Springfield, Illinois, as he embarks on his journey to Washington.

On a cold, rainy morning, Lincoln boarded a two-car private train loaded with his family's belongings, which he himself had packed and bound. Mary Lincoln was in St. Louis on a shopping trip, and she joined him later in Indiana. It was a somber occasion. Lincoln was leaving his home and heading into the maw of national crisis. Since he had been elected, seven states of the lower South had seceded from the Union. Lincoln knew that his actions upon entering office would likely lead to civil war. He spoke to the crowd before departing: "Here I have lived a quarter of a century, and have passed from a young man to an old man. Here my children have been born, and one is buried. I now leave, not knowing when, or whether ever, I may return, with a task before me greater than that which rested upon Washington. Without the assistance of that Divine Being...I cannot succeed. With that assistance, I cannot fail...To His care commending you, as I hope in your prayers you will commend me, I bid you an affectionate farewell."

A bystander reported that the president-elect's "breast heaved with emotion and he could scarcely command his feelings." Indeed, Lincoln's words were prophetic--a funeral train carried him back to Springfield just over four years later.  ¶ 2/11/2006 08:54:00 AM