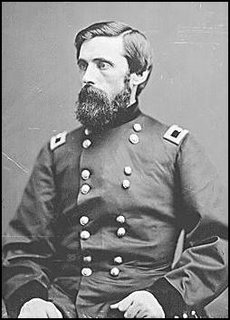 Union General John Rawlins is born in Galena, Illinois. Rawlins was a close personal aide to General Ulysses S. Grant and was reported to have kept Grant from drinking heavily during the war.

Rawlins' family was originally from Virginia but had settled in Illinois shortly before Rawlins' birth. When Rawlins was a teenager, his father abandoned the family and headed for the gold fields of California. The younger Rawlins received little formal education, but he studied law and was admitted to the Illinois bar in 1854. He became the city attorney in 1857 and became involved in state politics. He was an avid supporter of Senator Stephen Douglas and served as an elector for Douglas in 1860.

When the war began, Rawlins became the aide de camp to Grant. He was Grant's principle staff officer throughout the war, and Grant said that Rawlins was nearly indispensable. Grant was known to be a heavy drinker when he served on the frontier in the 1850s, and there were rumors that he continued to drink during the early stages of the war. Rawlins appears to have been instrumental in keeping Grant from imbibing during the Civil War.

After the war, Rawlins served in the west. He helped General Greenville Dodge survey the route for the Union Pacific Railroad, which later became part of the first transcontinental line. For his efforts, the town of Rawlins, Wyoming, was named after him. When Grant became president in 1869, Rawlins became secretary of war. His health declined after taking office, and he died just six months later. Rawlins is buried in Arlington Cemetery.  ¶ 2/13/2006 06:45:00 AM