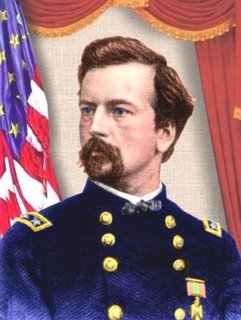 Webb's grandfather had fought at Bunker Hill during the American Revolution, and his father, James Watson Webb, was a prominent newspaper editor and diplomat who served as minister to Brazil during the Civil War. The younger Webb, known as Andy to his family, attended West Point and graduated in 1855, 13th in a class of 34. He taught mathematics at West Point and in Florida before the Civil War.

When the war broke out, Webb was assigned to defend Ft. Pickens, Florida, but was soon called to Washington and placed in the artillery in the army guarding the capital. He fought at the First Battle of Bull Run in July 1861 as assistant to the chief of artillery, Major William Barry. A year later, Webb was in charge of the artillery at the Battle of Malvern Hill at the end of the Seven Days battles. In that engagement, Union cannon devastated attacking Confederate infantry, and Webb was commended for leading the artillery line. General Daniel Butterfield later said that Webb's leadership saved the Union army from destruction.

Despite his numerous achievements, Webb was constantly passed over for promotion due to politics within the Army of the Potomac. He was closely associated with General George McClellan, and McClellan's removal in late 1862 left Webb stalled at colonel. Even some of his West Point students became generals before Webb, but the promotion finally came in June 1863. The new brigadier general played a key role at the Battle of Gettysburg just a few weeks later. On July 3, Webb commanded troops defending the center of the Union line on Cemetery Ridge. He rallied his troops as they received the brunt of Pickett's Charge, and his actions earned him the Congressional Medal of Honor.

Webb fought with the Army of the Potomac during the great campaign in the spring of 1864, and he was wounded in the head at the Bloody Angle, the most vicious fighting in the Battle of Spotsylvania. He was out of action for nearly eight months. When he returned, he became chief of staff for army commander General George Meade. After the war, Webb taught at West Point, served as president of the College of the City of New York, and wrote extensively about the war. He died in Riverdale, New York, in 1911. A statue of Webb adorns the Gettysburg battlefield near the spot where he earned the Medal of Honor.  ¶ 2/15/2006 06:35:00 AM