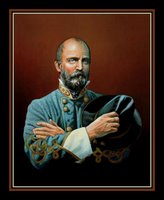 Confederate General Lewis Armistead is born in New Bern, North Carolina. Armistead is best known for leading Pickett's Charge at Gettysburg, where he was mortally wounded.

Armistead's father, Walker Keith Armistead, and his five uncles served in the military during the War of 1812. One of them, George Armistead, commanded Fort McHenry at Baltimore during the British bombardment that produced the Star Spangled Banner. Lewis Armistead entered West Point in 1834 but did not graduate due to poor grades, although some sources indicate that the reason was a fight with another cadet, Jubal Early, who was later a comrade in the Army of Northern Virginia.

Despite this, Armistead joined the military as a second lieutenant and fought in the Seminole War in Florida and was cited for heroism three times in the Mexican War. During the 1850s, he served on the frontier and developed a very close friendship with another officer, Pennsylvanian Winfield Scott Hancock. When the Civil War broke out, he resigned his commission to join his home state, Virginia.

At the beginning of the war, Armistead commanded the 57th Virginia Infantry, but by April 1862 he was in a brigadier general. He fought during the Seven Days' battles in June and July 1862, but played only minor roles at Antietam, Fredericksburg, and Chancellorsville. On July 2, 1863, he led a brigade in Pickett's division during the climactic charge at Gettysburg. In a tragic coincidence, Armistead's men attacked Hancock's corps at the center of the Union line on Cemetery Ridge. Armistead crossed the wall that protected the Federal cannon, representing the high water mark of the Confederacy. He fell wounded there, and the attack stalled. Armistead was found by Captain Henry Bingham, an aide to Hancock, and Armistead told him to, "Say to General Hancock for me that I have done him and done you all an injury which I shall regret the longest day that I live." Armistead lingered for two days, and he requested that his personal effects be given to Hancock, who was also seriously wounded that day. Armistead was buried in a family plot at St. Paul's Church in Baltimore, Maryland.  ¶ 2/18/2006 07:23:00 AM

The most potent herbal medicine to cure all illness complaints :)