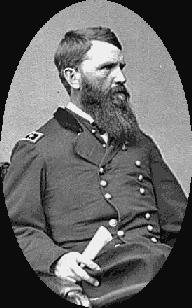 Union General Francis Preston Blair, Jr., is born in Lexington, Kentucky. The colorful Blair was instrumental in keeping Missouri part of the Union during the early stages of the Civil War.

Blair's father had served as an advisor to several presidents. His namesake and youngest son was privileged and rebellious as a youth. As a college student, the younger Blair was expelled from the University of North Carolina and Yale for misconduct. He finally finished his degree at Princeton, but he was denied graduation for participating in a wild party in his final week. The degree was bestowed a year later after an influential friend intervened on his behalf.

Blair studied law in Kentucky and began to practice in Missouri with his brother, Montgomery, who would later serve as Postmaster General under Abraham Lincoln. During the 1850s, Francis ran an anti-slave newspaper in St. Louis and served in the Missouri legislature. He was elected to Congress in 1856. Blair was deeply opposed to the extension of slavery, even though he owned a few slaves himself. His stance led to his defeat for reelection in 1858.

In 1860, Blair campaigned for Abraham Lincoln and regained his Congressional seat. When the war erupted, he organized Missouri's Unionist forces and helped save the Federal arsenal in St. Louis from the Confederates. Blair personally organized seven regiments from Missouri. He became a brigadier general, winning the respect of his superiors, Generals Ulysses S. Grant and William T. Sherman. Blair commanded a corps during Sherman's March to the Sea in 1864.