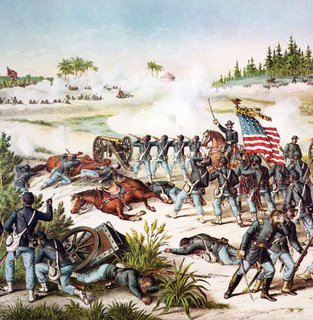 In the largest battle fought in Florida during the Civil War, a Confederate force under General Joseph Finegan decisively defeats an army commanded by General Truman Seymour. The victory kept the Confederates in control of Florida's interior for the rest of the war.

Olustee was the climax to a Union invasion of Florida a few weeks before. General Quincy Gilmore, commander of the Union's Department of the South, dispatched Seymour to Jacksonville on February 7. Seymour's troops secured the town and began to send cavalry raiders inland to Lake City and Gainesville. Just behind the troops came John Hay, private secretary to President Lincoln. Hay began issuing loyalty oaths to residents in an effort to form a new, Republican state government in time to send delegates to the 1864 party convention. Under the president's plan of reconstruction, a new state government could be formed when 10 percent of the state's prewar voting population had taken a loyalty oath.

Seymour began moving towards Lake City, west of Jacksonville, to destroy a railroad bridge and secure northern Florida. Finegan possessed only 500 men at Lake City, but reinforcements were arriving. By the time the two sides began to skirmish near the railroad station of Olustee, each side had about 5,000 troops. Throughout the day on February 20, a pitched battle raged. The Confederates were close to breaking the Yankee lines when they ran low on ammunition. When more cartridges arrived, the attack continued. By late afternoon, Seymour realized the fight was lost and he began to retreat.

The Yankees suffered 1,800 killed, wounded, or captured, while the Confederates lost about 900 men. It was one of the highest casualty rates of the war for the Union. The battle did disrupt the flow of supplies from Florida to other Confederate armies, but it failed to bring about a new state government. Most of Florida remained in Confederate hands until the end of the war.  ¶ 2/20/2006 08:27:00 AM