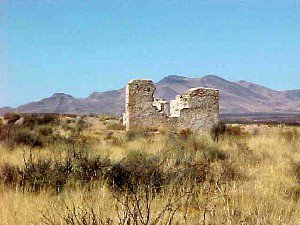 This action was part of the broader movement by the Confederates to capture New Mexico and other parts of the West. This would secure territory that the Rebels thought was rightfully theirs but had been denied them by political compromises made before the Civil War. Furthermore, the cash-strapped Confederacy could use western mines to fill their treasury. From San Antonio, the Rebels moved into southern New Mexico (which included Arizona) and captured the towns of Mesilla, Doýa Ana, and Tucson. Sibley, with 3,000 troops, now moved north against the Federal stronghold at Fort Craig on the Rio Grande.

At Fort Craig, Canby was determined to make the Confederates lay siege to the post. The Rebels, Canby reasoned, could not wait long before running low on supplies. Canby knew that Sibley did not possess sufficiently heavy artillery to attack the fort. When Sibley arrived near Fort Craig on February 15, he ordered his men to swing east of the fort, cross the Rio Grande, and then capture the Val Verde fords of the Rio Grande. He hoped to cut off Canby's communication and force the Yankees out into the open.

At the fords, five miles north of Fort Craig, a Union detachment attacked part of the Confederate force. They pinned the Texans in a ravine and were on the verge of routing the Rebels when more of Sibley's men arrived and turned the tide. Sibley's second in command, Colonel Tom Green, filling in for an ill Sibley, made a bold counterattack against the Union left flank. The Yankees fell back in retreat, and headed back to Fort Craig.