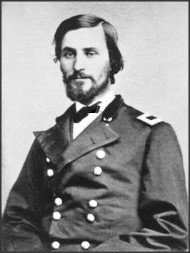 Sherman was marching an army east across Mississippi from Vicksburg to Meridian. He had captured and destroyed a vital Confederate supply center at Meridian and was planning to move further east to Selma, Alabama, another Rebel supply base. Sherman was relying on cavalry support from General William Sooy Smith, who was coming southeast from Memphis, Tennessee. Sherman directed Smith to meet him at Meridian on February 10, but Sherman did not occupy Meridian until February 14. Meanwhile, Smith dallied in Tennessee waiting for the arrival of Colonel George Waring Jr.'s cavalry brigade from Kentucky, and did not leave for Mississippi until February 11.

On February 20, some of Smith's men skirmished with Confederates near West Point, just over 100 miles north of Meridian. The Yankee troops slowly drove the Confederates back through West Point. The next day, more skirmishing flared as the troops continued south. The Confederates were led by Jeffrey Forrest, Nathan's younger brother. The elder Forrest waited south of West Point with the intent of drawing Smith's force into a swampy area between two rivers. Smith caught on to the plan just before it was too late and began a retreat back through West Point. On February 22, The Yankees made a stand north of West Point and fought off a Confederate attack during which Jeffrey Forrest was killed. With the older Forrest blocking his way to Meridian, Smith retreated back to Memphis.

The Confederates suffered 144 men killed, wounded, or missing, while the Union lost 324. The engagement was significant because Sherman was forced to return to Vicksburg. The battle also lifted Confederate morale and enhanced the reputation of Nathan Bedford Forrest, who had taken on a much larger Union force and won.  ¶ 2/22/2006 07:57:00 AM

Comments:
If you have a history of illness that is difficult to recover, maybe our next article will help you to recover