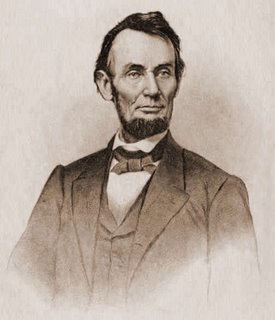 President-elect Abraham Lincoln arrives in Washington amid secrecy and tight security. With seven states having already seceded from the Union since Lincoln's election, the threat of civil war hung in the air.

Allen Pinkerton, head of a private detective agency, had uncovered a plot to assassinate Lincoln when he passed through Baltimore on his way to the capital. Lincoln and his advisors disagreed about how to respond to the threat. Some, including Pinkerton, wanted Lincoln to slip secretly into Washington, which would mean skipping an address to the Pennsylvania legislature in Harrisburg. Lincoln did not want to appear cowardly, but he felt the threats were serious.

Lincoln agreed to the covert arrival. With Pinkerton and Ward Hill Lamon, his former law partner, Lincoln slipped out of the hotel in Harrisburg on the evening of February 22. He wore a soft felt hat instead of his customary stovepipe hat, and he draped an overcoat over his shoulders and hunched slightly to disguise his height. The group boarded a sleeper car and arrived in Baltimore in the middle of the night. The trio slipped undetected from the Calvert Street station to Camden station across town. There, they boarded another train and arrived without incident in Washington at 6:00 a.m. On the platform, the party was surprised when a voice boomed, "Abe, you can't play that on me." It was Congressman Elihu B. Washburne, a friend of Lincoln's from Illinois. Washburne escorted Lincoln to the Willard Hotel.

A myth arose that Lincoln had dressed as a woman to avoid detection, but this was not the case. He did draw considerable criticism in the press for his unceremonious arrival. Northern diarist George Templeton Strong commented that if convincing evidence of a plot did not surface, "the surreptitious nocturnal dodging...will be used to damage his moral position and throw ridicule on his Administration." Lincoln later regretted the caper and commented to a friend "I did not then, nor do I now believe I should have been assassinated had I gone through Baltimore..." Regardless of how he had arrived, Lincoln was safely in Washington, ready to assume the difficult task ahead.  ¶ 2/23/2006 06:43:00 AM

Thank you for your support who has read our article. I'm very happy if you can share our article below