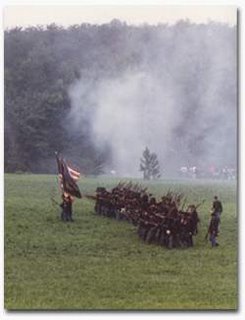 Union General George Thomas attacks Joseph Johnston's Confederates near Dalton, Georgia, as the Yankees probe Johnston's defenses in search of a weakness. Thomas found the position too strong and he ceased the offensive the next day, but the Yankees learned a lesson they would apply during the Atlanta campaign that summer.

General Ulysses S. Grant, the overall commander of Union troops in the west, drove the Confederates out of Tennessee at the Battle of Missionary Ridge and Lookout Mountain in November 1863. The Army of Tennessee, then commanded by General Braxton Bragg, fell back to northern Georgia, where Bragg was replaced by Johnston. The defensive-minded Johnston arranged his force along the imposing Rocky Face Ridge near Dalton.

Grant sent part of his army under General William T. Sherman to Mississippi for a campaign against Meridian, a major supply center. This forced Johnston to send part of his army to reinforce Leonidas Polk, who was defending Meridian against Sherman. When Grant became aware of this transfer, he sent Thomas to probe Johnston's defenses in hopes of finding a weak spot among the depleted Confederates. The Yankees enjoyed initial success but soon found that Johnston's troops were strong. The reinforcements sent towards Mississippi were no longer needed after Polk abandoned Meridian, so they returned to Johnston's army. Now, Thomas was outnumbered and was forced to retreat after February 25.

Casualties were light. Thomas suffered just fewer than 300 men killed, wounded, or captured, while Johnston lost 140. The Union generals did learn a valuable lesson, though-a direct attack against Rocky Face Ridge was foolish. Three months later, Sherman, in command after Grant was promoted to commander of all forces, sent part of his army further south to another gap that was undefended by the Confederates. The intelligence garnered from the Battle of Dalton helped pave the way for a Union victory that summer.