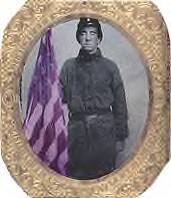 Union soldier Elisha Hunt Rhodes visits Washington during a typical week in winter quarters. Although combat was the main job of a soldier, most men serving in the Civil War spent very few days each year in actual combat. Rhodes kept a diary during his four years in the Union army, and his notes reveal the monotony of the winter months in the Army of the Potomac. A member of the 2nd Rhode Island, Rhodes fought in every campaign from First Bull Run to Appomattox and he rose from private to colonel in four years.

The winter months were usually quiet for the soldiers. The wet, cold weather made movement very difficult, and there were few major battles fought during this time. Days were spent drilling, and Rhodes wrote that other days were spent sleeping and smoking. Many gambled among themselves, and others drank or visited the prostitutes that plied their trade near the camps. Picket duty could be a welcome respite to the boredom, and Rhodes' unit built a road during one winter encampment. On another winter occasion, he wrote: "One day is much like another at headquarters." Rhodes spent most of his winter months in or near Washington, and the capital city provided many more diversions than those available to soldiers in more remote locations. On this day, Rhodes went to hear Senator Henry Wilson from Massachusetts speak on expelling disloyal members of Congress. After listening to the speech, Rhodes and friend Isaac Cooper attended a fair at a Methodist church and met two young women, who the soldiers escorted home.

Like other soldiers, Rhodes welcomed the departure from winter quarters and an end to the monotony. "Our turn has come," he wrote excitedly when his unit began moving south to Richmond in 1864.  ¶ 2/26/2006 03:29:00 PM