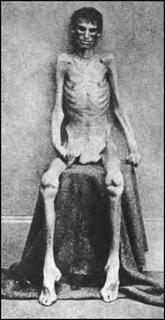 The first Union prisoners begin arriving at Andersonville prison, which was still under construction in southern Georgia. Andersonville became synonymous with death as nearly a quarter of its inmates died in captivity. Henry Wirz, commandant at Andersonville, was executed after the war for the brutality and mistreatment committed under his command.

The prison, officially called Camp Sumter, became necessary after the prisoner exchange system between North and South collapsed in 1863 over disagreements about the handling of black soldiers. The stockade at Andersonville was hastily constructed using slave labor, and it was located in the Georgia woods near a railroad but safely away from the front lines. Enclosing 16 acres of land, the tall palisade was supposed to include wooden barracks but the inflated price of lumber delayed construction, and the Yankee soldiers imprisoned there lived under open skies, protected only by makeshift shanties called "shebangs," constructed from scraps of wood and blankets. A stream initially provided fresh water, but within a few months human waste had contaminated the creek.

The prison was built to hold 10,000 men, but within six months more than three times that number were incarcerated there. The creek banks eroded to create a swamp, which occupied more than one-fifth of the compound. Rations were inadequate, and at times half of the population was reported ill. Some guards brutalized the inmates and there was violence between factions of prisoners.

Andersonville was the worst among many terrible Civil War prisons, both Union and Confederate. Wirz paid the price for the inhumanity of Andersonville--he was the only person executed in the aftermath of the Civil War.  ¶ 2/27/2006 06:40:00 AM