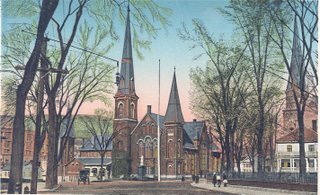 War Sermon - Rev. Mr. Sanford's* war sermon at the Baptist Church in this village on Sunday evening last was founded on the text, Ezra 7:26, "And whosoever will not do the law of thy God, and the law of the King, let judgment be executed speedily upon him, whether it be unto death, or to banishment, or to confiscation of goods, or to imprisonment." The conclusions of the speaker, drawn from his subject, were most forcible, and his denunciations of the crime of slavery and its upholders, both North and South, most deserved. Among other statements, which every reasoning man has not failed to discover, he said that the holding in bondage of the slaves by our government, or the refusal to emancipate them, kept half the southern army in the field. He thought that the government held more sacred southern homes, if emancipation should breed revolt and revenge on the part of the negroes upon the families of the slaveholders than it did the shedding of the blood of our fathers and brothers, which is filling thousands of northern homes with mourning. Emancipation and consequent slave-revolt would scatter the rebel army like chaff.