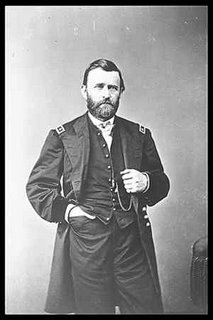 President Lincoln nominates Ulysses S. Grant for the newly revived rank of lieutenant general. At the time, George Washington was the only other man to have held that rank. Winfield Scott also attained the title but by brevet only; he did not actually command with it.

The promotion carried Grant to the supreme command of Union forces and capped one of the most remarkable success stories of the war. Born in Ohio in 1822, Grant attended West Point and graduated in 1843, 21st in a class of 39. He served in the Mexican War in 1847 to 1848 and on the frontier in the 1850s. During this time, Grant acquired experience in logistics and the supply of troops, developing skills that later made him a success during the Civil War. He also developed a reputation as a heavy drinker, and he denied charges of drunkenness throughout the war.

When the Civil War erupted, Grant was not in the service and was working as a clerk in his father's store in Galena, Illinois. Grant reenlisted after Fort Sumter fell in April 1861; his first assignment was to raise troops in Illinois. In June, the governor appointed him colonel of the 21st Illinois. After leading his regiment to protect a railroad in Missouri, Grant was promoted to brigadier general on July 31, 1861. In early 1862, Grant won the first major Union victories of the war when he captured Forts Henry and Donelson in Tennessee. For the next two years he was the most successful general in the army. His campaign to capture Vicksburg was one of the most efficient offensives of the war, and the Yankees captured the Mississippi River and most of Tennessee under his leadership.

Lincoln replaced Henry Halleck as the commander of all Union armies when he elevated Grant to the rank of lieutenant general. Unlike Halleck, Grant did not serve from behind a desk; he took the field with the largest Federal force, the Army of the Potomac, as he moved against Confederate General Robert E. Lee in Virginia.