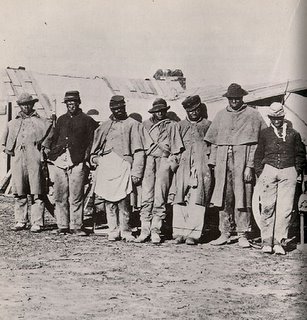 President Lincoln signs a bill creating the Bureau of Refugees, Freedmen, and Abandoned Lands. Known as the Freedmen's Bureau, this federal agency oversaw the difficult transition of blacks from slavery to freedom.

The Freedman's Bureau was born out of abolitionist concern for freed slaves during the war. Union General Oliver O. Howard served as commissioner for the entire seven years of the bureau's existence. The bureau was given power to dispense relief to both white and black refugees in the South, to provide medical care and education, and to redistribute "abandoned" lands to former slaves. The latter task was probably the most effective measure to ensure the prosperity and security of the freedmen, but it was also extremely difficult to enact.

Many factors stymied the bureau's work. White southerners were very hostile to the Yankee bureau members, and even more hostile to the freedmen. Terror organizations such as the Ku Klux Klan targeted both blacks and whites and intimidated those trying to improve the lives of the freedmen. The bureau lacked the necessary funds and personnel to carry out its programs, and the lenient policies of Andrew Johnson's administration encouraged resistance. Most of the land confiscated from Confederates was eventually restored to the original owners, so there was little opportunity for black land ownership.

Although the Freedman's Bureau was not able to provide long-term protection for blacks, nor did it ensure any real measure of equality, it did signal the introduction of the federal government into issues of social welfare and labor relations.  ¶ 3/03/2006 08:13:00 AM