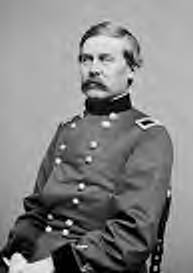 Within six months of his having played a key role in the opening of the battle of Gettysburg, cavalryman John Buford was dead of typhoid fever.
The Kentucky-born soldier had moved to Illinois before being appointed to West Point. Graduating in 1848 he was posted to the dragoons and saw some action along the frontier and in the expedition against the Mormons in Utah in 1857-1858.
His Civil War-era assignments included: captain, 2nd Dragoons (since March 9, 1854); captain, 2nd Cavalry (change of designation August 3, 1861); major and assistant adjutant general (November 12, 1861); brigadier general, USV (July 27, 1862); commanding Cavalry Brigade, 2nd Corps, Army of Virginia (July 27 - September 12, 1862); commanding Reserve Brigade, Cavalry Corps, Army of the Potomac (February 12 - May 22, 1863); commanding the division (May 22-27, June 9 - August 15, and September 15-November 21, 1863); and major general, USV (to rank from July 1, 1863).
After staff duty in the Washington defenses he obtained a position on Pope's staff in northern Virginia. He was rewarded with a brigadier's star and command of a brigade of cavalry. While leading this at 2nd Bull Run he suffered a wound. The next spring he was commanding the Reserve Brigade, which was composed mainly of regular army units, and took part in Stoneman's raid during the Chancellorsville Campaign. He directed the division at Brandy Station, Aidie, Middleburg, and Upperville.
It was two of his brigades that initiated the fighting at Gettysburg northwest of the town. He was able to hold off the Confederate assaults until the arrival of Union infantry and enabled Meade to make a stand south and east of the town on the next two days.
He later served through the Bristoe Campaign, but just before the commencement of the Mine Run Campaign he was struck down by typhoid and had to relinquish his command on November 21, 1863. He died in Washington on December 16, 1863, is buried at West Point. His commission as major general of volunteers was presented to him on his deathbed.


Abraham Lincoln becomes the 16th president of the United States. Although he extended an olive branch to the South, he also made it clear that he intended to enforce federal laws in the seceded states.

Since Lincoln's election in November, seven states had left the Union. Worried that the election of a Republican would threaten their rights, especially slavery, the lower South seceded and formed the Confederate States of America. In the process, some of those states had seized federal properties such as armories and forts. By the time Lincoln arrived in Washington for his inauguration, the threat of war hung heavy in the air. Lincoln took a cautious approach in his remarks, and he made no specific threats against the southern states. As a result, he had some flexibility in trying to keep the states of the upper South--North Carolina, Tennessee, Virginia, Arkansas, Missouri, Kentucky, Maryland, and Delaware--in the Union.

In his address, Lincoln promised not to interfere with the institution of slavery where it existed, and he pledged to suspend the activities of the federal government temporarily in areas of hostility. However, he also took a firm stance against secession and the seizure of federal property. The government, insisted Lincoln, would "hold, occupy, and possess" its property and collect its taxes. He closed his remarks with an eloquent reminder of the nation's common heritage:

"In your hand, my fellow countrymen, and not in mine, is the momentous issue of civil war. The government will not assail you. You can have no conflict without being yourselves the aggressors. You have no oath in Heaven to destroy the government, while I shall have the most solemn one to "preserve, protect, and defend" it...We are not enemies, but friends. We must not be enemies. Though passion may have strained, it must not break our bonds of affection. The mystic chords of memory, stretching from every battlefield and patriot grave, to every living heart and hearthstone, all over this broad land, will yet swell the chorus of the Union, when again touched, as surely they will be, by the better angels of our nature."

1865 Lincoln inaugurated for a second term


President Lincoln begins his second term, expressing his desire for the war to end and extending a gracious hand to the South. "Fondly do we hope--fervently do we pray--that this mighty scourge of war may speedily pass away." He concluded with the following stirring statement: "With malice toward none; with charity for all; with firmness in the right...let us strive on to finish the work we are in; to bind up the nation's wound...to do all which may achieve and cherish a just, and a lasting peace, among ourselves, and with all nations."