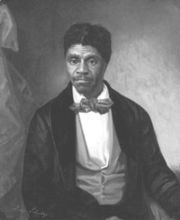 The United States Supreme Court issues a decision in the Dred Scott case, one of the most important cases in the court's history. In the ruling, the court affirmed the right of slave owners to take their slaves into the western territories, negating the doctrine of popular sovereignty and severely undermining the platform of the newly created Republican Party.

At the heart of the case was the most important question of the 1850s: Should slavery be allowed in the West? As part of the Compromise of 1850, residents of newly created territories could decide the issue of slavery by vote, a process known as popular sovereignty. When popular sovereignty was applied in Kansas in 1854, however, violence erupted. Americans hoped that the Supreme Court could settle the issue that had eluded a Congressional solution.

Dred Scott was a slave whose owner, an army doctor, had spent time in Illinois, a free state, and Wisconsin, a free territory at the time of Scott's residence. The Supreme Court was stacked in favor of the slave states. Five of the nine justices were from the South while another, Robert Grier of Pennsylvania, was staunchly pro-slavery. Chief Justice Roger B. Taney wrote the majority decision, which was issued on March 6. The court held that Scott was not free based on his residence in either Illinois or Wisconsin because Scott was not considered a person under the Constitution--in the opinion of the justices, black people were not considered citizens when the Constitution was drafted in 1787. According to Taney, Dred Scott was the property of his owner, and property could not be taken from a person without due process of law.

In fact, there were free black citizens of the United States in 1787, but Taney and the other justices were attempting to halt further debate on the issue of slavery in the territories. The decision inflamed regional tensions, which burned for another four years before exploding into the Civil War.  ¶ 3/06/2006 10:38:00 AM