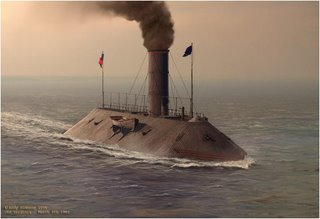 The C.S.S. Virginia was originally the U.S.S. Merrimack, a forty-gun frigate launched in 1855. The Merrimack served in the Caribbean and was the flagship of the Pacific fleet in the late 1850s. In early 1860, the ship was decommissioned for extensive repairs at the Gosport Navy Yard in Norfolk, Virginia. It was still there when the war began in April 1861, and Union sailors sank the ship as the yard was evacuated. Six weeks later, a salvage company raised the ship and the Confederates began rebuilding it.

The project required $172,000 to build an ironclad upon the Merrimack's hull. A new gun deck was added and an iron canopy was draped over the entire vessel. The most challenging part of the construction came in finding the iron plating. Richmond's Tredegar Iron Works finally produced it, but the plant had to alter its operations to roll more than 300 tons of scrap iron for the two-inch thick plating.

The Virginia was launched on February 17, 1862. On March 9, it steamed from Norfolk toward Union ships guarding the mouth of the James River at Hampton Roads. Rumors of the ironclad had circulated for several days among the Yankee sailors, and now they saw the creation first hand. They soon wished they hadn't. The Virginia attacked the U.S.S. Cumberland, firing several shots into her before ramming the Federal ship and sinking it. The other Union ships fired back, but the shots were, in the words of one observer, "having no more effect than peas from a pop-gun." Ninety-eight shots hit the Virginia, but none did significant damage. The Virginia then attacked the U.S.S. Congress, which exploded when fires caused by the Confederate barrage reached the powder magazine. The Virginia next ran the U.S.S. Minnesota aground before calling it a day.

It had been the worst day in U.S. naval history and it signaled the end of the wooden ship era. But help was on its way--the next day, the Virginia fought the most famous naval duel in history with the U.S.S. Monitor, a Union ironclad that was able to fight the Confederate ship to a draw.  ¶ 3/08/2006 07:54:00 AM