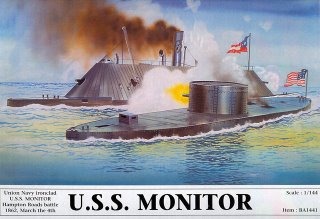 One of the most famous naval battles in history occurs as the ironclads Monitor and Virginia fight to a draw off Hampton Roads, Virginia. The ships pounded each other all morning but the armor plates easily shed the cannon shots, signaling a new era of steam-powered iron ships.

The C.S.S. Virginia was originally the U.S.S. Merrimack, a forty-gun frigate launched in 1855. The Confederates captured it and covered it in heavy armor plating above the waterline. Outfitted with powerful guns, the Virginia was a formidable vessel when the Confederates launched her in February 1862. On March 8, the Virginia sunk two Union ships and ran one aground off Hampton Roads.

The next day, the U.S.S. Monitor steamed into the bay. Designed by Swedish engineer John Ericsson, the vessel had an unusually low profile, rising from the water only 18 inches. The flat iron deck had a 20-foot cylindrical turret rising from the middle of the ship; the turret housed two 11-inch Dahlgren guns. The shift had a draft of less than 11 feet so it could operate in the shallow harbors and rivers of the South. It was commissioned on February 25, 1862, and arrived at Chesapeake Bay just in time to engage the Virginia.

At 9:00 am, the duel began and continued for four hours. The ships circled one another, jockeying for position as they fired their guns. The cannon balls simply deflected off the iron ships. In the early afternoon, the Virginia pulled back to Norfolk. Neither ship was seriously damaged, but the Monitor effectively ended the short reign of terror that the Confederate ironclad had brought to the Union navy.

Both ships met ignominious ends. When the Yankees invaded the James Peninsula two months after the battle at Hampton Roads, the retreating Confederates scuttled their ironclad. The Monitor went down in bad weather off Cape Hatteras, North Carolina, at the end of the year. Though they had short lives, the ships ushered in a new era in naval warfare.  ¶ 3/09/2006 09:39:00 AM