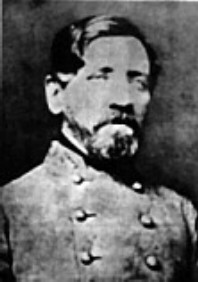 Born in 1824 in Biloxi, Mississippi, Whiting was educated in Boston and at Georgetown College in Washington, where he graduated first in his class at age 16. He then entered the U.S. Military Academy, where in 1845 he again topped his graduating class. Whiting joined the Corps of Engineers and designed coastal fortifications in the West and South, including the defenses for the Cape Fear River in North Carolina. During this project, he got married and settled in Wilmington, North Carolina.

When the war began, Whiting offered his services to the new Confederate States of America. He was at Fort Sumter when the Union garrison surrendered at the start of the war. He returned to Wilmington in the summer of 1861 to supervise the construction of defenses for the city, and then moved to northern Virginia as chief engineer for the Confederate army forming there. Whiting was responsible for moving troops from the Shenandoah Valley to Manassas in time for the First Battle of Bull Run on July 21. His work was a vital component of the Confederate rout of Union troops there.

Whiting was given command of a division, and his leadership during the Seven Days' battles in June 1862 earned him the praise of the top Confederate leaders. In November 1862, he was given command of the District of Wilmington, allowing him to return to his North Carolina home. He set about strengthening the city's defenses and constructing Fort Fisher at the Cape Fear River's mouth. Partly due to his efforts, Wilmington was one of the most important blockade running ports for the Confederates throughout the war. Whiting spent the rest of the war in Wilmington, with the exception of a few months in 1864 spent shoring up the defenses around Petersburg, Virginia.

Whiting's Fort Fisher was a formidable barrier to the Union capture of Wilmington. General Benjamin Butler led a Yankee force against Fort Fisher in December 1864, but the garrison fended off the attack. The next month, General Alfred Terry launched another assault; this time, Fort Fisher fell to the Yankees. Whiting was badly wounded and captured during the attack. He was able to write his report of the battle three days later, but his health failed when he was shipped to New York and confined in prison at Governor's Island. William H. C. Whiting died on March 10 at age 40.  ¶ 3/10/2006 10:28:00 AM