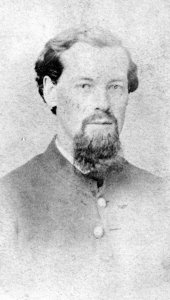 Confederate General and Berkshire County native Edward Aylesworth Perry is born in Richmond, Massachusetts. The transplanted Yankee led a Florida brigade during the war, and served as governor of the state after the war.

Perry received his education at Lee Academy in Massachusetts and then at Yale University. In 1852, he moved to Georgia to teach school and study law. After a sojourn in Alabama, he settled in Pensacola, Florida, to practice. When the war erupted, Perry took up arms for his adopted state, becoming a captain in the Pensacola Rifle Rangers. His company was later absorbed into the 2nd Florida Infantry. He participated in the occupation of the Pensacola navy yard before joining the Confederate army in Virginia.

The 2nd Florida fought in the Peninsular campaign, defending Yorktown in the face of General George B. McClellan's invading Union army. Perry become the regiment's commander when Colonel George Ward was killed near Williamsburg, and Perry led the unit through hard fighting during the Seven Days' battles in June 1862. Three months later, the Floridians fought at the Battle of Antietam and suffered heavy losses. Perry was promoted to brigadier general and received command of two other Florida regiments. He fought at Fredericksburg and Chancellorsville, but typhoid fever caused him to miss the Battle of Gettysburg in July 1863, where his brigade lost more than half of its men.

Perry returned to command, but he was seriously wounded at the Battle of the Wilderness in May 1864. He was forced to relinquish control of his brigade, and after his recovery he spent the rest of the war commanding reserve troops in Alabama. He served as governor of Florida from 1884 to 1888, and in that post he signed a bill providing pensions for Confederate veterans. His failing health forced him to Texas in 1889, where he died from a stroke at Kerrville on October 15. He is buried in St. John's Cemetery in Pensacola.  ¶ 3/15/2006 09:37:00 AM