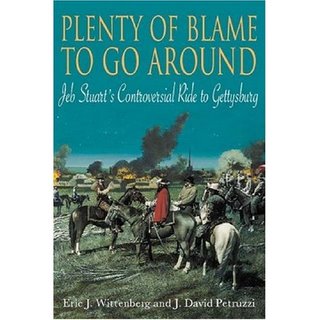 Eric Wittenberg and J.D. Petruzzi have collaborated on a new book that goes in-depth into Jeb Stuart's journey to Gettysburg. Give it a read.

The Gettysburg Campaign is in its opening hours.

Harnesses jingle and hooves pound as Confederate cavalryman James Ewell Brown (JEB) Stuart leads three brigades of veteran troopers on a ride that triggers one of the Civil War's most enduring controversies.

Plenty of Blame to Go Around: Jeb Stuart's Controversial Ride to Gettysburg is the new book that is the most detailed and comprehensive narrative of Stuart's ride to Pennsylvania in June and July 1863 ever written, and explores the historiography of the resulting controversy like never before.

Eric J. Wittenberg (his blog here) has written widely on Civil War cavalry operations. His books include Glory Enough for All (2002), The Union Cavalry Comes of Age (2003), and The Battle of Monroe's Crossroads and the Civil War's Final Campaign (2005). He lives in Columbus, Ohio. J. David Petruzzi is the author of several magazine articles on Eastern Theater cavalry operations, conducts tours of cavalry sites of the Gettysburg Campaign, and is the author of the popular "Buford's Boys" website. Petruzzi lives in Brockway, Pennsylvania.  ¶ 9/25/2006 08:52:00 AM 0 comments

11 September 2006
Momentum Builds in Downtown Gettysburg From "The Gettysburg Quarterly," the park newspaper of the Gettysburg National Military Park.

Gettysburg National Military Park, the Gettysburg Foundation, and the Gettysburg community are working to create a “seamless” story of the battle of Gettysburg for visitors by telling compelling stories of the battle through town, the aftermath of battle in the town, the civilian experience during the tragic days of July 1863, and the town’s recovery. The master plan for this effort, known as the “Interpretive Plan for the Borough of Gettysburg,” was created in 2000 and is being implemented by Main Street Gettysburg. Main Street’s goals are to preserve the town’s historic resources, expand interpretation, enhance the economic benefits of tourism in the community, and improve the quality of life for residents and visitors.

Momentum is building in Gettysburg’s downtown on several of these projects, some of which have already been completed and others will be coming on line in the next two years. Gettysburg College restored the Majestic Theater in downtown Gettysburg and it now operates as a performing arts center and cinema. Gettysburg’s historic Train Station is owned by the Borough and is now fully restored. It is being developed as a downtown information station and orientation space and will be a destination for the planned park/downtown shuttle.

The Wills House is on the National Register of Historic Places, and enjoys national renown as the place where President Abraham Lincoln spent the night before delivering the Gettysburg Address on November 19, 1863. Construction will begin later this year to rehabilitate the structure to its 1863 appearance, and install exhibits for its future life as a public Lincoln Museum. The museum will open in 2008. Exhibit designers Gallagher and Associates are creating the exhibits in the Wills House and the Train Station, as well as those in the new Museum and Visitor Center, which will help achieve the goal of seamless interpretation.

Two other major projects are in development now to improve the visitor experience: a shuttle system connecting the new park museum and visitor center with several sites in the town and a new, updated signage system throughout the park and the town. The shuttle system, a joint project between the park, the Borough of Gettysburg, and the Adams County Transit Authority, will alleviate traffic congestion and create new opportunities for visitors to experience the town on foot (with a beneficial side effect of increased visitor spending). The partners are also working on a project to create a new system of signs, called Wayfinding. This coordinated effort will address four needs:

1. Gettysburg Foundation’s need for new directional signage from
the highways to the new museum and visitor center
2. Gettysburg National Military Park’s need for new and updated
signs to replace a system that is 30 years old and failing
3. A combined need between the Park and the Borough for
new wayfinding systems within the town to reduce
confusing sign clutter and improve wayfinding for both cars
and pedestrians.
4. Signs needed for the new shuttle system.

Happily, all four of these sign projects are being coordinated and Gallagher and Associates, designers of both the new museum exhibits and the Wills House exhibits, will be designing new wayfinding systems for all four needs.  ¶ 9/11/2006 02:00:00 PM 6 comments

A thief took two Civil War documents from a sealed case at the main
branch of the Public Library of Charlotte and Mecklenburg County, North
Carolina, the weekend of August 26.

The display case, which has since been removed, was sealed by screws.
Two staff members could see the display from their desks but were often
away helping patrons.

"I can only say that maybe [the documents] offended someone, or maybe
they thought they were worth a whole lot of money," said Archivist
Sheila Bumgarner, who curated the exhibit, in the August 31 Charlotte
Observer. The items, a handwritten furlough for a Confederate soldier
and a certificate of medical examination for a slave, had a combined
value of about $400, according to the library. However, other documents
left behind in the exhibit were more valuable.

Retired police captain Walt Hilderman, who loaned the documents to the
library, said that the thief could have been motivated by controversy
stemming from his split with the group Sons of Confederate Veterans and
a book he had written on conscription in the Confederacy, They Went
into
the Fight Cheering. "Those documents were specifically targeted for
theft for a reason," he told the paper. "Whether there was some
political threat involved . . . is all a possibility."  ¶ 9/06/2006 07:33:00 PM 24 comments

05 September 2006
Civil War Book News Update A much anticipated updating of the Civil War Book News has happened, with the first wave of 2006 postings now available. Do yourself a favor, and take a peek. Dimitri Rotov, the editor, has done a pretty thorough job once again. Please be aware that all links launch popup windows. If you have a popup blocker, you may need to defeat it by right clicking on the link, then selecting "open in new window."  ¶ 9/05/2006 03:26:00 PM 6 comments

01 September 2006
The Commercialization of the Confederate Battle Flag 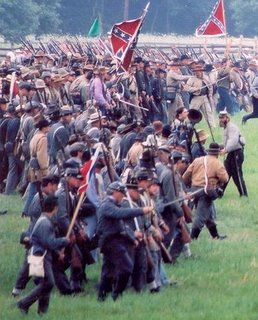 My blog-pal Greg Roach sent me this interesting link from a blog called "FourFour," written by a guy named Rich Juzwiak from Brooklyn, NY. I did chuckle a bit, as I have two of the offending t-shirts mentioned in the story (the "History Lesson" one, and I sport a "I'd Rather Be Historically Accurate..." shirt, albeit a green t-shirt with yellow writing, and no flag to be found). I do think that the Confederate Battle flag has been commercialized to death (anything to make a buck, hey guys) but I have always looked at the flag as a historical symbol of a terrible conflict, not the "racist" icon it has turned into.  ¶ 9/01/2006 07:45:00 AM 6 comments