(Gettysburg, Pa.) – In a letter dated January 26, 2010, a coalition of state and national preservation groups conveyed to Adams County, Pa., businessman David LeVan their decision to oppose his effort to open a casino a half-mile to the south of Gettysburg National Military Park. In the letter, the Civil War Preservation Trust, National Parks Conservation Association, National Trust for Historic Preservation and Preservation Pennsylvania cited the location’s proximity to the battlefield as a direct threat, noting that the potential development and traffic impacts place the National Park at further risk.

After thanking LeVan for his outreach to the preservation community in this matter and his generosity to various local philanthropic causes, the four groups stressed that their position does not stem from any opposition to gambling, but, rather, from “our longstanding commitment to ensuring that singular and significant historic sites like the Gettysburg Battlefield are treated with the respect and consideration they deserve

“Some places are just too important to be treated with anything less than the greatest respect, and Gettysburg is one of those places,” said Richard Moe, president of the National Trust for Historic Preservation. “Anyone who has visited the battlefield in recent years can attest to the fact that commercial development is threatening the visitor experience at Gettysburg, and this proposed casino would greatly exacerbate the problem. A new casino located so close to this sacred soil is simply unacceptable.”

After preliminary plans for the casino became public in late 2009, each preservation organization performed its own independent due diligence investigation, including meeting with Mr. LeVan personally, before reaching the same conclusion: the site’s proximity to the hallowed ground of Gettysburg creates an inappropriate juxtaposition damaging to the national park.

“We remain committed to protecting our national icon—Gettysburg National Military Park” said Tom Kiernan, president of the National Parks Conservation Association. “A casino conflicts with the heritage-based economy of Gettysburg, with its meaning in American history today, and with its future relevance.”

If licensed, the casino would be incorporated into the existing Eisenhower Resort and Conference Center, just one half-mile from the boundary of Gettysburg National Military Park. The site is also within the historically sensitive “study area” of the battlefield, as defined by the American Battlefield Protection Program (the battlefield preservation arm of the National Park Service).

Not only is this proposal significantly closer to the park than the 2006 Crossroads Gaming Resort and Spa plan, it also lies along the Emmitsburg Road, at the heart of the Journey Through Hallowed Ground National Scenic Byway (created in October 2009) and Journey Through Hallowed Ground National Heritage Area (signed into law in May 2008). Such designations are not undertaken lightly and, according to the letter, “reinforce our belief that this is a region of tremendous historic significance that we have a duty to safeguard for future generations.”

“I remember four years ago when our organizations joined a dedicated group of local activists to defeat this short-sighted scheme the first time. No matter where I went, anywhere in the country, people were astounded at the very idea of a gambling casino at Gettysburg,” said CWPT president James Lighthizer. “There was a near-universal agreement that locating and marketing a gambling facility at Gettysburg unavoidably conflicts with the essential meaning of this place in American history.”

A. Roy Smith, chairman of the board of Preservation Pennsylvania, reiterated that the fundamental reasoning behind his group’s opposition to a Gettysburg-area casino has not changed. “We remain steadfast in our opposition to any casino proposed in close proximity to the Gettysburg National Military Park. Preservation Pennsylvania’s reasons for including this sacred place on the 2006 Pennsylvania At Risk listing have not changed — a casino near this highly significant site, in any location, is inappropriate.”

In addition to the proposal’s proximity to the national park, the letter outlined additional concerns with the project, including potential impact on the region’s vibrant heritage tourism industry. Citing current visitation statistics and scientific economic impact analysis, the groups concluded that “the combination of Civil War preservation and the family friendly nature of Adams County has created a proven, winning formula for the park and its neighboring communities. A casino will conflict with this proven economic engine—heritage tourism, and development compatible with and respectful of that heritage.”

The letter further noted that the portion of Cumberland Township where the casino would be located predominantly features residential dwellings and agricultural operations, with limited and generally small-scale commercial development occasionally intermixed. The groups expressed the opinion that the facility would “have the potential to significantly increase traffic through the area, generate more incompatible large-scale development, and would likely necessitate the kind of eye-catching signage that would be out of place in what has up to now been a relatively undeveloped area.”

About the Civil War Preservation Trust (CWPT)
With 55,000 members, the Civil War Preservation Trust is the largest nonprofit battlefield preservation organization in the United States. Its mission is to preserve our nation’s remaining Civil War battlefields and encourage their appreciation through education and heritage tourism. Since 1987, the organization has saved more than 29,000 acres of hallowed ground, including 700 acres at Gettysburg. CWPT’s website is located at www.civilwar.org.

About the National Parks Conservation Association (NPCA)
Since 1919, the nonpartisan, nonprofit National Parks Conservation Association has been the leading voice of the American people in protecting and enhancing our National Park System. NPCA, its members, and partners work together to protect the park system and preserve our nation’s natural, historical, and cultural heritage for generations to come. NPCA is a non-profit 501(c)3 organization with more than 325,000 members, including more than 15,000 members in Pennsylvania. NPCA’s website is located at www.npca.org.

About the National Trust for Historic Preservation (NTHP)
The National Trust for Historic Preservation is a non-profit membership organization bringing people together to protect, enhance and enjoy the places that matter to them. By saving the places where great moments from history took place, NTHP helps revitalize neighborhoods and communities, spark economic development and promote environmental sustainability. With headquarters in Washington, DC, 9 regional and field offices, 29 historic sites, and partner organizations in all 50 states, NTHP provides leadership, education, advocacy and resources to a national network of people, organizations and local communities committed to saving places, connecting us to our history and collectively shaping the future of America’s stories. NTHP’s website is located at www.preservationnation.org. 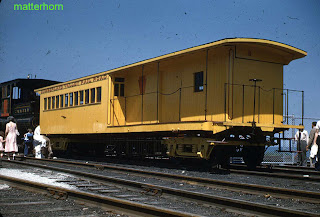 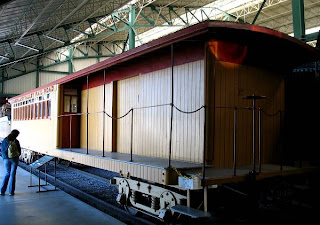 Research indicates that Cumberland Valley Railroad combine car B was built to handle U.S. Mail service in the Cumberland Valley of Pennsylvania. It is possible this car was used to transport troops of the Union Army during the Civil War. Car B was used in regular service (passenger) until 1888. It was then assigned to maintenance of way service as a tool and supply car until being placed in storage in 1909. The gangway or gallery along the side of the baggage area makes this a unique car. Very few gallery cars were built, and they are often confused with pay cars which were used by many railroads.
The Cumberland Valley car has a wooden frame and body. There are no provisions in the passenger compartment for heat or sanitation. Lighting was provided by a single candle stand. There is seating for 29 passengers and only one seat is not reversible.
The Cumberland Valley Railroad became a subsidiary of the Pennsylvania Railroad before the Civil War. During the Antietam and Gettysburg campaigns, the Cumberland Valley and another PRR subsidiary, the Northern Central, transported troops and supplies for the Union Army. Both railroads suffered extensive damage to their rolling equipment and physical plants.
The Cumberland Valley Railroad combine car B was added to the National Register of Historic Places in 1979  ¶ 1/26/2010 03:47:00 PM 15 comments 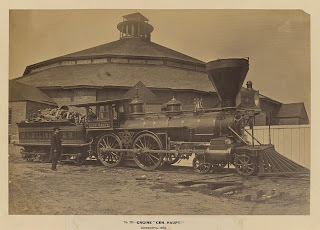 A non-profit group is proposing to offer Civil War themed train rides from New Freedom to Hanover Junction, PA beginning in 2013. The group, Steam into History, Inc. wants to eventually expand the trips all the way to York City, Pa. Carl Linquist wrote the article in the York (PA) Post Dispatch. You can read it here.  ¶ 1/23/2010 02:05:00 PM 11 comments

A Return to Active Blogging My schedule will be allowing me to begin blogging in earnest again. This blog is active again and will remain that way. I have weeded out some of the old blogs listed at right, removed the ones that are gone or terribly inactive. I have left some that haven't been updated in a long time, because there is still some good information posted there. If you have a Civil War blog that is not listed, drop me a line and I will be glad to list you here.  ¶ 1/23/2010 11:26:00 AM 4 comments

Civil War battlefield in New Mexico gets spruced up (NM)

What Manner of Men Were These? (OK)