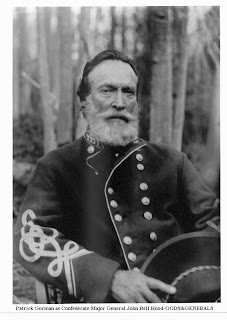 I am reposting this blog entry form November 30, 2010 to try to get the numbers up for Civil War movies and for my friend, Patrick Gorman. Follow the directions in the post, and let's get the numbers way up there!!

Here’s a proposition for readers of "Strike The Tent." I am asking all the "GETTYSBURG" and "GODS & GENERALS" fans to go on-line to IMDB and click on those films, AND my friend Patrick Gorman in the cast. Although THE LAST FULL MEASURE is unlikely to come to the screen, we still want more Civil War films, right?

They have made BAND OF BROTHERS and THE PACIFIC, now we want a 10-part series on HBO about the Civil War!!! TO APPOMATTOX... is coming but…

If you hit/click on his name on IMDB you also boost his rating as an actor - he deserves it - BUT it serves us all because we all want more Civil War based stories on film.

HERE’S HOW YOU DO IT:
Go on-line and log on to the Internet Movie DataBase.
At the top in SEARCH, type in his name, Patrick Gorman">then hit GO.
The Patrick Gorman listing will pop up.
Under his pictures is a choice of clicking on his name or "GETTYSBURG."
Click on "GETTYSBURG."
The film site comes up.
Scroll down "cast".
Find Patrick Gorman and click.
His site pops up again.
The same works for "GODS & GENERALS."
Or, you can do it the lazy way and just click on his name anywhere in this posting....
Do this as often as you want. The ratings change weekly so it’s on-going.  ¶ 11/30/2010 09:35:00 AM 7 comments

New “Battle App” provides visitors with own personal historian as they explore the Gettysburg Battlefield.

(Washington, D.C.) – The Civil War Preservation Trust (CWPT) is pleased to announce the unveiling of its first “Battle App,” a mobile battlefield tour that takes advantage of the GPS technology and Apple’s iPhone platform. The Gettysburg Battle App, which focuses on battle action that occurred at Devil’s Den and Little Round Top, was created in partnership with Intermap Technologies, an industry leader in mobile GPS-enabled touring.


Explore the Battle of Gettysburg


“Our new Gettysburg Battle App adds a new dimension to the battlefield experience. It is filled with a wealth of information, including audio and video content and CWPT’s trademark battlefield maps enhanced with GPS technology,” remarked CWPT president James Lighthizer. “Now anyone can enjoy the benefits of a historian-led tour of the Gettysburg battlefield. It puts history right at your

Kevin Thomas, Intermap’s vice president of marketing is equally excited about the potential for Battle Apps. “Our partnership with the Civil War Preservation Trust has allowed us to leverage our award-winning AccuTerra GPS-enabled map application within a new and exciting Civil War battlefield touring app. This new Battle App will make it much easier for visitors to learn more about the great battles of the Civil War and to visit the places where these historic events occurred.”

The Battle App features a GPS-guided battlefield tour with numerous “virtual signs” and other points of interest that can be accessed with a few simple clicks. Each stop along the way contains a rich description of the historical significance of the site, along with photos, video commentary from battlefield experts and audio accounts from the soldiers and civilians who trod this ground during the Civil War.

“This new technology will make it easier than ever before for more visitors to the Gettysburg Battlefield to enjoy the benefits of a historian led tour,” said Gettysburg licensed battlefield guide, Timothy Smith. “These new Battle Apps are simple to use, yet full of valuable information about the men who fought at Devil’s Den and Little Round Top. The breadth of material included allows for almost unlimited customization of your personal battlefield tour.”

Once downloaded from the Apple iTunes store, the program is resident on the iPhone — meaning a visitor can wander the battlefield without worry that may stray too far from a cell signal. After downloading the application, a user can review the content anywhere — the only aspects of the program that won’t function away from the intended battlefield are the GPS features.

Initially, the application will only be available for iPhone, but CWPT will work with our technology partner to make our Battle Apps available on other GPS-enabled platforms, like Blackberry and Android phones, in the future. Although only the Devils Den and Little Round Top tour is currently available, a second project featuring the 1862 Battle of Fredericksburg is already in production. Future Battle Apps for other popular battlefields, including, Antietam, Chancellorsville, Chickamauga, Manassas, Shiloh and the Wilderness, are also planned.

For more information about the content, use and availability of GPS-enable CWPT Battle Apps, please visit www.civilwar.org/battleapp.

With 55,000 members, CWPT is the largest nonprofit battlefield preservation organization in the United States. Its mission is to preserve our nation’s endangered Civil War battlefields and to promote appreciation of these hallowed grounds. CWPT has helped preserve more than 29,000 acres of battlefield land across the nation. CWPT’s website is www.civilwar.org.  ¶ 11/30/2010 09:12:00 AM 0 comments