(Orange, Va.) – In an unexpected development, Walmart announced this morning that it has abandoned plans to pursue a special use permit previously awarded to the retail giant for construction of a supercenter on the Wilderness Battlefield. The decision came as the trial in a legal challenge seeking to overturn the special use permit was scheduled to begin in Orange County circuit court.
“We are pleased with Walmart’s decision to abandon plans to build a supercenter on the Wilderness battlefield,” remarked James Lighthizer, president of the Civil War Trust. “We have long believed that Walmart would ultimately recognize that it is in the best interests of all concerned to move their intended store away from the battlefield. We applaud Walmart officials for putting the interests of historic preservation first. Sam Walton would be proud of this decision.”
The Civil War Trust is part of the Wilderness Battlefield Coalition, an alliance of local residents and national groups seeking to protect the Wilderness battlefield. Lighthizer noted that the Wilderness Battlefield Coalition has sought from the very beginning to work with county officials and Walmart to find an alternative location for the proposed superstore away from the battlefield.
“We stand ready to work with Walmart to put this controversy behind us and protect the battlefield from further encroachment,” Lighthizer stated. “We firmly believe that preservation and progress need not be mutually exclusive, and welcome Walmart as a thoughtful partner in efforts to protect the Wilderness Battlefield.”
In August 2009, the Orange County Board of Supervisors approved a controversial special use permit to allow construction of the Walmart Supercenter and associated commercial development on the Wilderness Battlefield. A wide range of prominent individuals and organizations publicly opposed the store’s location, including more than 250 American historians led by Pulitzer Prize-winners James McPherson and David McCullough. One month after the decision, a group of concerned citizens and the local Friends of Wilderness Battlefield filed a legal challenge to overturn the decision.
The Battle of the Wilderness, fought May 5–6, 1864, was one of the most significant engagements of the American Civil War. Of the 185,000 soldiers who entered combat amid the tangled mass of second-growth trees and scrub in Virginia’s Orange and Spotsylvania counties, some 30,000 became casualties. The Wilderness Battlefield Coalition, composed of Friends of Wilderness Battlefield, Piedmont Environmental Council, Preservation Virginia, National Trust for Historic Preservation, National Parks Conservation Association, and Civil War Trust, seeks to protect this irreplaceable local and national treasure.
The Civil War Trust is the largest nonprofit battlefield preservation organization in the United States. Its mission is to preserve our nation’s endangered Civil War battlefields and to promote appreciation of these hallowed grounds. To date, the Trust has preserved nearly 30,000 acres of battlefield land in 20 states. Learn more at www.civilwar.org.  ¶ 1/26/2011 11:12:00 AM 4 comments

Washington, DC Archivist of the United States David S. Ferriero announced today that Thomas Lowry, a long-time Lincoln researcher from Woodbridge, VA, confessed on January 12, 2011, to altering an Abraham Lincoln Presidential pardon that is part of the permanent records of the U.S. National Archives. The pardon was for Patrick Murphy, a Civil War soldier in the Union Army who was court-martialed for desertion.

Lowry admitted to changing the date of Murphy’s pardon, written in Lincoln’s hand, from April 14, 1864, to April 14, 1865, the day John Wilkes Booth assassinated Lincoln at Ford’s Theatre in Washington, DC. Having changed the year from 1864 to 1865, Lowry was then able to claim that this pardon was of significant historical relevance because it could be considered one of, if not the final official act by President Lincoln before his assassination.

The images are in the public domain and not subject to any copyright restrictions. 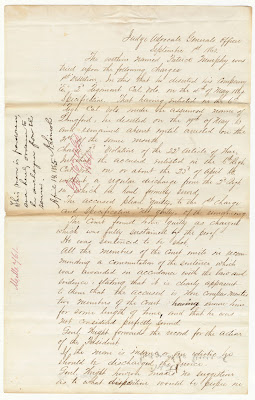 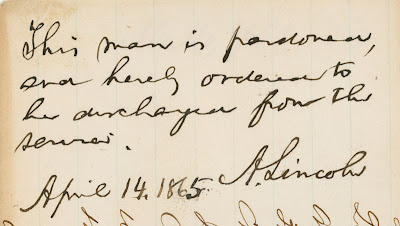 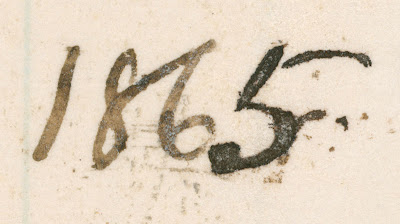 In 1998, Lowry was recognized in the national media for his “discovery” of the Murphy pardon, which was placed on exhibit in the Rotunda for the Charters of Freedom in the National Archives Building in Washington, DC. Lowry subsequently cited the altered record in his book, Don’t Shoot That Boy: Abraham Lincoln and Military Justice, published in 1999.

In making the announcement, the Archivist said, “I am very grateful to Archives staff member Trevor Plante and the Office of the Inspector General for their hard work in uncovering this criminal intention to rewrite history. The Inspector General’s Archival Recovery Team has proven once again its importance in contributing to our shared commitment to secure the nation’s historical record.”
National Archives archivist Trevor Plante reported to the National Archives Office of Inspector General that he believed the date on the Murphy pardon had been altered: the “5” looked like a darker shade of ink than the rest of the date and it appeared that there might have been another number under the “5”. Investigative Archivist Mitchell Yockelson of the Inspector General’s Archival Recovery Team (ART) confirmed Plante’s suspicions.

On January 12, 2011, Lowry ultimately agreed to be interviewed by the Office of the Inspector General’s special agent Greg Tremaglio. In the course of the interview, Lowry admitted to altering the Murphy pardon to reflect the date of Lincoln’s assassination in violation of 18 U.S.C. § 2071. Against National Archives regulations, Lowry brought a fountain pen into a National Archives research room where, using fadeproof, pigment-based ink, he altered the date of the Murphy pardon in order to change its historical significance.

Inspector General Paul Brachfeld expressed his tremendous appreciation for the work of Plante and the Inspector General’s Archival Recovery Team in resolving this matter. Brachfeld added that “the stated mission of ART is ‘archival recovery,’ and while the Murphy pardon was neither lost or stolen, in a very real way our work helped to ‘recover’ the true record of a significant period in our collective history.”

23 January 2011
OnlineCourses.net Top 30 Civil War Blogs OnlineCourses.net has compiled a list of what they consider to be the Top 30 Civil War blogs. Unfortunately "Strike the Tent..." did not make the cut, but I did have 63.33% of their list in my blogroll, and gladly add the remaining blogs to my list. Added today were "Daily Chronicles of the Civil War," "Civil War Notebook," "The Sable Arm," "Civil War Florida," "The Battle of Franklin," "Renegade South," "Irish in the American Civil War," "Crossroads," "Cannonball," "John Brown the Abolitionist--A Biographers Blog," and "Civil War Headstones." My little blog is, however, listed at #31 on the Civil War Top 100, a site courtesy of SoldierStudies.org.  ¶ 1/23/2011 12:53:00 PM 4 comments