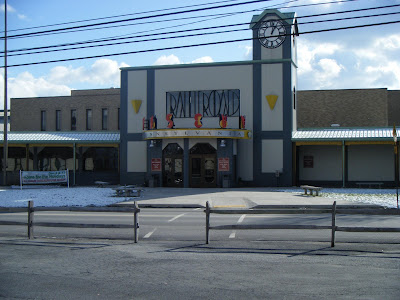 Here is a story from the Intelligencer-Journal of Lancaster, PA by Larry Alexander about some exciting news at my place of employment, the Railroad Museum of Pennsylvania, that involves the Civil War.

Some letters cautioned Laird, a Pennsylvania Railroad superintendent in Philadelphia, to be leery of the quality of equipment produced by Norris Locomotive Works. In other letters, Lewis voiced frustration with sparks thrown from wood-burning steam locomotives.

The letters also mentioned wages for employees, which ranged from $38 to $120 per month, depending on the position.

And, of course, they expressed concern about the Civil War, especially how to protect Pennsylvania Railroad's Altoona shops from Confederate saboteurs and how to convert surplus locomotives so they could run on the narrower gauge Southern railroads, allowing for the movement of Union troops and supplies over captured rail lines.

All of these letters, plus hundreds of thousands of other documents, railroad blueprints and photographs, soon will be at the public's fingertips.

The Norfolk Southern Foundation recently awarded the Friends of the Railroad Museum of Pennsylvania a $60,000 grant that will greatly enhance the museum's efforts to put its vast collection online.

With the money, the museum can purchase more computers and scanners, a photograph scanner and a book copier that will permit them to copy pages in books without flattening the spine.

"We have a lot of interest in this material," said Brad Smith, the museum's curator. "We have hundreds of people contacting us every year, and this will allow us to better help them find the information they're looking for."

The museum stores its artifacts, including between 250,000 and 500,000 photographs, in its second-floor archive and an archive annex in the basement. There are not many workstations so items to be scanned or put on microfilm often must be brought up from the basement annex to workstations on the second floor, entered into the searchable database and then returned to the annex.

With the new equipment, additional workstations can be set up in the annex and more volunteers can be brought in to help.

"Right now, we have as many volunteers as we have workstations," archives technician Nick Zmijewski said. "So, by adding more workstations, we can speed up the process."

Even so, Zmijewski said, with "hundreds of cubic feet of records" to enter, the project will "take years to get it all done."

The new technology, Zmijewski said, will begin arriving "within weeks, if not sooner."

Smith and Zmijewski expressed gratitude for the funding to the Norfolk Southern Foundation.

"One of our missions is to make sure our collection is accessible to people, that they know about them and that they can use them," Smith said. "And whether it's a Ph.D. historian, a sixth-grader working on a book report or anyone in between, we want to make sure the public has access."  ¶ 2/14/2011 01:09:00 PM

Comments:
In a way, for an art-lover like myself, decorating our home is quite easy. I just please myself mostly, with my poor husband going along with most of my choices. I am always collecting beautiful things, like handicraft decorative pieces, little sculptures and hangings.
And I simply hang lovely paintings in all our rooms. Not all are originals of course, as who can afford many of those.
I order many prints on canvas from wahooart.com who have a vast collection of images from Western art, that you can choose to make economically-priced prints like this Interior in Aubergines, by Henri Matisse, http://en.wahooart.com/A55A04/w.nsf/Opra/BRUE-5ZKCMX, from there.
I can choose the frames as well and my orders are delivered quickly to my home.