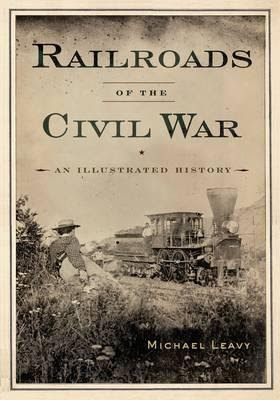 Railroads—already firmly entrenched in American culture and moving the nation through the industrial age and toward world prominence—took on a new role during the Civil War: that of major weapon.
Trains moved troops, functioned as mobile artillery and were crucial in supplying food and munitions to both sides of the conflict. In his new book and in his presentation, author Michael Leavy illuminates the role of railroads in the Civil War through compelling period photographs and drawings, as well as a narrative rich in details, not only about trains and ancillary equipment but also how they influenced the outcome of battles and the war in general.
Michael Leavy is a professional artist, specializing in mural painting, and
the author of nine books on history. You won’t want to miss this program! Mr. Leavy will be available to sign his book both for one hour before and one hour after the program.

Regular Railroad Museum of Pennsylvania admission rates will apply to attend this program. Program seating will be on a first come, first serve basis of availability.  ¶ 3/28/2011 09:43:00 AM

Do not believe the tag stamped around the jewelry including 14
karat or 18 karat because that could be done easily. This just isn't about casting aspersions on pawn shops, but basically about stating things the way they should be stated. There's much better
good around, should you simply enjoy going on the internet
and seeking goods.