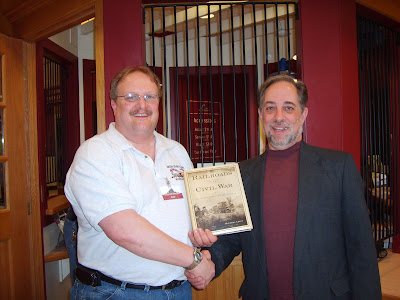 After 5 years of research and writing, “Railroads of the Civil War author Michael Leavy emphatically states that “I can't look at the war without the railroads looming prominently.”
Addressing a crowd of more of more than 100 railroad and Civil War enthusiasts at the Railroad Museum of Pennsylvania on April 2nd, Leavy also believes that “railroad men do not get the play they deserve” when it comes to the Civil War.
Leavy is a professional “paint decorator” who specializes in murals, wood graining, wall glazing and marbleizing, and is originally from Rochester, NY. He has always had an interest in American history, especially the Civil War and railroads. He is the author of eight other books through Arcadia Publishing. Most deal with regional history, but they include a title dealing with railroads, "The New York Central System" which sells nationally and in the Whistle Stop Shop at the museum.
“Railroads of the Civil War: An Illustrated History" focuses on the impact railroads had in the war. It details how they escalated the war, prolonged the war and led to its terrible carnage. “Railroads had altered the nation and by the time of the war they were navigating us through the Industrial Revolution towards world prominence,” he said. Leavy believes that the secret to an army’s success relies on logistics; “the ability to move soldiers and supplies from base to base.” Prior to the railroad, men and pack animals moved things at a slow pace. ”The animals had to rested, be fed and were often hobbled. Railroads could now move men and supplies at a rate ten times faster,” according to Leavy. He further explained that armies now had the ability to grow in size exponentially, and that war could now range across the continent--anywhere you could lay tracks. “Most battles developed around railheads or nearby in the district. The establishment of the USMRR was one of the biggest technological undertakings of the war and was given priority over nearly everything else,” he said. “Under Herman Haupt's brilliant direction, the railroads were used like whips against the Confederacy. His use of railroads in the Civil War laid the foundation for all future use of trains in war not just here in America but around the world” 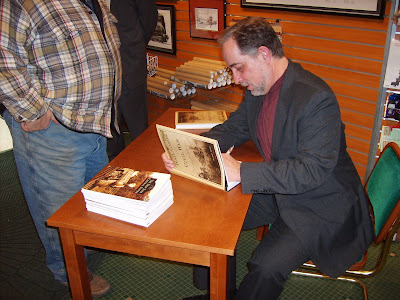 Leavy also acknowledges that although there are several important works on the use of railroads in the war, being a train and Civil War buff, he wanted to investigate the subjects more fully and offer a combination narrative and pictorial history. “A lot of new information has come to the surface so I felt it was time for an update. I contacted railroad historical societies and museums to gather the most up – to - date research. In the process I found many new photos, and using digital technology I was able to extract railroad images from larger views. There was also a lot of enthusiasm for the project and I received many photographs via email.”
The experience was often frustrating and daunting for Leavy because there was an abundance of misinformation for him to glean through. “I kept reading the same things over and over and sensed there was more to some these matters.” One of his main objectives was to bring humanity to the book and not “just go on about piston sizes and boiler pressures.” This is why passages about Mary Todd Lincoln, Anna Custis Lee and “that young band leader from Honeoye Falls who marched with Sherman” were included. “I wanted to stretch the canvas to encapsulate the entire war” said Leavy.
When asked to elaborate on his statement earlier that railroaders never got the “play” they deserved, Leavy was quick to point out that in many books, studies and movies, the railroads and railroad men were ignored. He also includes the construction corps who were transported to sites in his praise. “They (railroads) directed the course of the war from beginning to end. They were a brave lot, particularly the engine crews who were often shot through the cab window by sharp shooters, or burned, scalded and horribly maimed when their engines were derailed.”
Leavy signed copies of both of his books carried at the Whistle Stop Shop for 1 hour before and 1 hour after the lecture.  ¶ 4/06/2011 03:10:00 PM