Strike The Tent...
14 May 2011
A Few Questions With Actor Patrick Gorman

Journeyman actor Patrick Gorman has appeared as a performer in almost all phases of entertainment. Although he's been a member of the Screen Actors Guild for over 50 years, he began his professional career as a dancer. He was with Judy Garland at the Palace on Broadway and Donald O'Connor and Sammy Davis, Jr. in Vegas. After 8 years of military service he went to Paris, France and was a clown at the Cirque Medrano and was the only American in "How to Succeed in Business without Really Trying.” Patrick then performed in television, film and stage in France before appearing in Joseph Papp's New York Shakespeare Festival. He has appeared on and off Broadway and spent time in such prestigious repertory companies as Seattle Rep, ACT (San Francisco) and Actor's Theatre Louisville, among others.
Two of his favorite roles in theatre were “Truffaldino” in "The Servant of Two Masters” and the prosecuting attorney in "In the Matter of J. Robert Oppenheimer," both at Seattle Rep. Favorite television and movie roles include “Jacques Du Bois,” the arrogant French fencer in "The Duel" on "Happy Days" and “Major General John Bell Hood” in the films, "Gettysburg" and "Gods & Generals." Patrick still trains, is a Black Belt in Aikido, and along with acting, his passions are poker, chess, Japanese calligraphy and the Foreign Language Committee for the Oscars. He was born in Visalia, California. Patrick was gracious enough to take the time to answer a few questions I had for him. I like to think we have become friends through numerous e-mails and also through messages through his "Facebook" page. Patrick and I plan on getting together during the 150th Sesquicentennial commemoration of the 1st Battle of Manassas July 21-24, 2011.

1)What attracted you to the role of General Hood?

When I first read Killer Angels I was interested in Armistead but I never got to read for that role. I think Richard (actor Richard Jordan) was already cast. I was happy to read for Hood and actually, for me, he was a better fit.

2) Has the portrayal of General Hood changed the way you approach your craft, or roles you audition for?

No, but each new role is different and the approach is different with them all. Sometimes there are characters that you just feel you ‘know’ and there isn’t a lot of preparation necessary. I know this sounds pretentious but I feel that I’m always preparing to play the next role even if I don’t know what it is. I think actors have a different way of experiencing reality. We file experience away to ‘use at a later date.’ Everything is grist for the mill, as it were. Imagination is the key. You have to be that person but it’s always you no matter who you embody. I’ve always loved period pieces but the craft no matter the time period is what is most important. When I was four years old on stage before a huge audience and the lights hit my eyes and I couldn’t see them – no, but I could feel them and I knew they were waiting for me to do something. That’s a powerful feeling for a four year old and it still is. I guess I’ll never grow up. 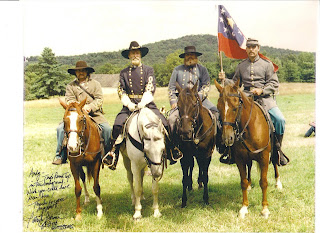 3) Do you have a favorite story or incident while filming “Gettysburg “or "Gods and Generals" that you would like to share?

The day we were filming the Fishhook scene there were plans for me to go off to Devil’s Den to film some ‘Hood in action’ scenes. Hood, of course, never got near Devil’s Den personally but they were filming some scenes they wanted to get of him and naturally an actor wants all the scenes he can get. It was getting late and Ron was afraid it would take too long to trailer our horses and drive them through the Park to the Devil’s Den area. I begged him to let me take my ‘ Texas ’ staff (the actual Wranglers of the film) and take off on horseback from the farm through the woods to Devil’s Den. I assured him I knew the way and that we could be there in about 15 minutes and get the sun and the scenes. Off we galloped through the dark woods with the low stone walls and the plank fences. It was almost ghostly as we went at a run to make our call. As we broke out of those forbidding woods coming down a hill from Devil’s Den was a whole line of tourists. We were going full tilt and for a moment, just a moment, those tourists thought they were seeing the ghosts of the Confederacy. We were really moving and their faces dropped. We didn’t slow down but I saluted them as I passed. There was a final look of relief that we probably weren’t phantoms but I’m sure they tell the story to this day. It was one of those momentary scares people don’t forget.


4) Has the way the reenacting community has embraced you been a surprise to you?

Yes, I must say I have been humbled by their attention. A journeyman actor doesn’t often get much response from the public – or they don’t know about it. I was fortunate to be a character that was known by the re-enactors. And I was able to bring him to life somehow satisfactorily enough that they accepted me as him despite the obvious differences and that has been very gratifying. I’m just lucky to have had the opportunity and the honor to embody Hood. 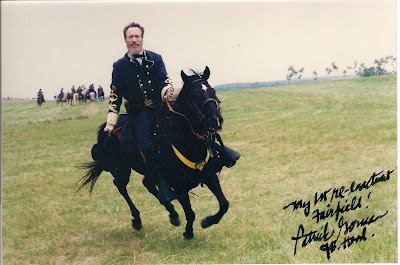 5) Are you a participant in many reenactments?

I was, of course, never a re-enactor. All the re-enactments that I participated in over a period of 12 to 14 years after the film was released were as an invited guest. I always felt a debt to the re-enactors because of their passion for the history and their help with information and stories which got me more in tune with Hood. In the beginning, since I didn’t film immediately, I would practice riding. You know, getting on and off a horse with a sword and spurs can be tricky if you aren’t careful and I was playing a man who was definitely an expert horseman. Often I’d ride into the re-enactor camps, not in uniform but as Hood and was accepted and treated as the general might have been. By the time I went before the cameras, I felt at home in ‘his’ skin. I really owe that to them.

6) Any upcoming historical projects in the works for you?

Well, I missed getting to read for anything in THE CONFORMIST – a wonderful film, I think. A great story and unbiased, I believe. Great drama. Great work. I’m trying to get involved with a series in preparation, TO APPOMATTOX. It follows primarily Grant and Hood doesn’t figure in the arc of the series, so I may have to be a Yankee in this one. That would be great though because I had ancestors on both sides and I’ve done Hood. Now it’s time to do a Yankee. I’m ready. I just hope that I’ll be considered. LINCOLN is being prepped, too and I have to look into what I could be in that project. Star names are filling most roles in both projects, so it’s difficult. Stars put behinds in seats and that’s a fact.

7) Has your "Facebook" page been a positive addition to your media catalog?

Oh, yes. A couple of years ago I did a biker film with a young company and as is often the case, I didn’t bring a camera with me on location. So, when we got back in town I contacted a few people to see if they had any pictures from the shoot. It was a lot of fun and I played a patriarch ghost biker. They said, ‘Oh, we’ll put up pictures on Facebook and you can see them there.’ And I said, ‘Face what?’ Well, I finally figured out how to get on Facebook and I got to see the pictures – they’re still on my Profile site in the albums – but what started happening was amazing. I started hearing from Civil War re-enactors that wanted to ‘friend’ me. Some had actually been in either GETTYSBURG or GODS & GENERALS, or both, and some had just seen me at a re-enactment or had just seen the films. It was very nice to hear the comments on the films and my work. And what is more, I continue to get about anywhere from 20 to 50 such requests each day. Unbelievable. I’m honored, I really am and I take them all very seriously and do my best to respond to everyone. I have to admit though that I’m about 500 requests behind. I intend to answer every one.

8) Have you ever thought about having a fan club?

You know, that’s interesting because a couple of re-enactor folks have suggested that they’d undertake organizing one for me but I just feel odd about that. Of course, I’d like to be a star – what actor wouldn’t? But the reality is I’m a journeyman actor and I don’t see the advantage of having a fan club. It’s great to have ‘fans’ – people who admire my work and that’s enough. I wouldn’t know how to go about organizing such a ‘thing’ anyway and I spend most of my time preparing and looking for work. It’s a nice thought though.

9) Can I get a quick statement from you to all the folks who admire your work?

I truly thank them for their support and the recognition. I love my craft and my profession. I’ve had an unusual career and I’m still doing my best to get better with every opportunity I have practicing my craft. I think it all comes down to doing your best at whatever it is you do and accepting yourself right where you are. It sure is nice to know you have touched someone. That’s the whole point of the work, to touch, to inspire, to teach, to make people laugh, to entertain and educate, to somehow make a difference. What goal could be better than that? It’s great to know your efforts sometimes succeed.

Patrick will be appearing at the 150th Sesquicentennial of the Battle of 1st Manassas July 21-24, 2011, where one of his duties will include the Sesquicentennial Blue and Gray Ball. The public is invited to join the committee for an evening of history where you can interact with Civil War personalities, then feast on an array of food provided by area restaurants, then step back in time to 1861 and enjoy music and dancing under the stars. The Ball will be held July 23, 2011 from 6:30 PM to 11:00 PM in the Loy E. Harris Pavilion located in the center of historic Old Town Manassas. Patrick will be hosting the event as the "Master of Ceremonies," for this evening of fun and performance, as well as be available for photos and Civil War conversation. Here is a link to the website .  ¶ 5/14/2011 06:53:00 PM