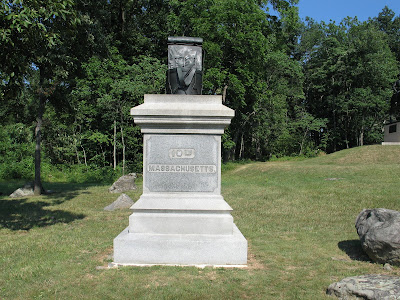 The 10th Regt. Mass. Vol. Inf. was composed of companies from the Connecticut Valley and the western part of the State. Five of these companies were in existence before the Civil War broke out, and five were recruited in May and June, 1861. The regiment rendezvoused at Hampden Park, Springfield, Mass., and Henry S. Briggs, a Pittsfield officer who had commanded a company in the 8th Regt. Mass. Vol. Mil., was made its colonel. The regiment was mustered into the service June 21, 1861. On July 10 it was reviewed by Gov. Andrew, and on the 15th received its colors presented by the ladies of Springfield. July 16 it entrained for Medford, Mass., where it remained at Camp Adams until the 25th, when it proceeded to Boston and took boats for Washington. Arriving at the capital on the 28th, it first encamped at Kalorama Heights, Georgetown, where it remained until August 6, when it was brigaded with the 7th Mass., 2d R. I., and 36th N. Y. Inf., and two days later removed to Brightwood. Col. Darius N. Couch, formerly commander of the 7th Mass., now commanded the brigade. At Brightwood the regiment spent most of the winter of 1861-62. Here it assisted in building Fort Massachusetts, later known as Fort Stevens. On March 27,1862, the regiment left Washington by boat for Hampton Roads. On the 29th it disembarked at Hampton, Va., and soon joined in the advance toward Yorktown. During the succeeding weeks it participated in the Peninsular campaign, losing heavily at Fair Oaks and Malvern Hill. Here it formed a part of Devens' Brigade, Couch's Division, Keyes' (4th) Corps. Recalled from Harrison's Landing the last of August, on Sept. 1, it arrived in Alexandria and united with Gen. Pope's army at Chain Bridge on the following day. About the middle of the month it joined in the advance toward South Mountain and Antietam, but did not reach these fields until the fighting was over. Later in the fall it became a part of the 2d Brigade, 3d Division, 6th Corps, and remained with this corps until its termination of service. It was present without loss at Fredericksburg, Dec. 13, 1862, then went into winter quarters between Falmouth and White Oak Church. Early in May, 1863, it took part in the operations of the 6th Corps near Fredericksburg in cooperation with Hooker's flank movement to Chancellorsville. On May 3, it assisted in the capture of Marye's Heights, and had a part in the battle at Salem Heights on the same afternoon. Its loss in these engagements was very heavy. Its colonel, Henry L. Eustis, now became commander of the brigade. The 10th participated with the rest of the 6th Corps in the Gettysburg campaign, suffering only slight loss. After being present at the battle of Rappahannock Station, Nov. 7, and participating in the Mine Run campaign during the latter part of the same month, the regiment retired to Brandy Station and went into winter quarters. It now belonged to Eustis' (4th) Brigade, Getty's (2d) Division, Sedgwick's (6th) Corps. Colonel Parsons now commanded the regiment. On the first day of the battle of the Wilderness, May 5, 1864, Getty's Division, detached from its corps, held the crossing of the Plank and Brock roads and performed most gallant service, the 10th suffering severe loss. On the 8th, 10th, 12th, and 18th of May it was engaged at Spottsylvania, suffering very severely on the 12th when it helped to support Hancock's assault on the Bloody Angle. Between May 5 and May 18, the regiment lost 220 officers and men, 45 of these being killed or mortally wounded. After participating with slight loss in the operations around Cold Harbor, the regiment crossed the James River, June 16, and advanced toward Petersburg, being engaged for the last time June 18 with slight loss. On the 19th it was withdrawn from the front, and its recruits and re-enlisted men were transferred to the 37th Regt. On June 21 it began its voyage homeward. Washington was reached June 22, and Springfield, Mass., on the 25th. On July 1 and 6,1864, the regiment was mustered out of the United States service. Regiment lost during service 10 Officers and 124 Enlisted men killed and mortally wounded and 1 Officer and 55 Enlisted men by disease. Total 190.

Comments:
My family members every time say that I am wasting my time here at net, except I know
I am getting familiarity daily by reading such fastidious posts.

Yesterday, while I was at work, my sister stole my iPad and tested to see if it can survive
a forty foot drop, just so she can be a youtube sensation.
My iPad is now broken and she has 83 views. I know this is totally off topic but I had to share it
with someone!

It's going to be finish of mine day, except before finish I am reading this great post to improve my experience.

I am not sure where you are getting your info, but good topic.
I needs to spend some time learning more or understanding more.
Thanks for magnificent information I was looking for this
information for my mission.

Hello there! I know this is kinda off topic but I was wondering
which blog platform are you using for this website? I'm getting fed up of Wordpress because I've had problems with hackers and I'm looking at alternatives for another platform. I would be great if you could point me in the direction of a good platform.

hello!,I like your writing so a lot! share we be in contact extra approximately your article on AOL?
I need a specialist in this space to unravel my problem.
May be that is you! Having a look ahead to peer you.

Feel free to surf to my weblog :: showrooms after days of heavy ::
:
: