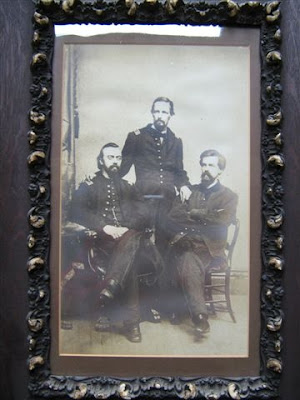 While doing research for the exhibition I will be guest-curating, I came across an old photo of 3 Civil War officers with the only information on the photo "Daddy's father- Capt. Suter - Civil War," with an arrow pointing at the gentleman seated on the right.

54th Pennsylvania Volunteer Infantry
Recruited in Cambria, Somerset, Dauphin, Northampton, and Lehigh counties in Pennsylvania, the 54th PVI consolidated at Camp Curtin in Harrisburg during August and September of 1861. Col. Jacob M. Campbell was commissioned to lead the regiment and Lt. Col. Barnabas M'Dermitt was chosen as the second in command.
The regiment was assigned to guard a portion of the B&O Railroad between Martinsburg, VA and Cumberland, MD. The regiment maintained its assignment until January of 1863 when it was assigned to the 8th Corps, Dept of Western Virginia, with Col. Campbell commanding the Brigade. The regiment saw limited action in 1863 before Gen. Franz Sigel took command of the Department and went on the offensive in the Shenendoah valley. By the end of the war Col. Campbell was Breveted to the rank of Brigadier General. The Regiment was mustered out of service on July 15, 1865 in Harrisburg.

Company A was recruited out of Indiana and Cambria Counties in August 1861. The Company was under the command of Captain John Suter. During the railroad duty the company was stationed on the South Branch Bridge. The company was involved in skirmishes with General John Imboden. The company served with distinction throughout the war.

Captain John P. Suter and Emma Augusta Vickroy were married August 30, 1864, at Ferndale near Johnstown, Pennsylvania, by the Rev. B. L. Agnew, while on a few days leave of absence from the Army of the Shenandoah, under Major General P. H. Sheridan. Mrs. Suter was the seventh daughter of Edwin Augustus Vickroy and Cornelia (Harlan) Vickroy, and granddaughter of Thomas Vickroy, who served as an officer under General George Clark in Kentucky and the west during the Revolutionary war. Both were by occupation land surveyors. The Suters had 8 children: Philip, born August 27, 1865, Eugene, died in infancy, 1868, Cornelia Vickroy, born February 11, 1870, Frederic John, November 19, 1871, Rufus Orlando, born January 25, 1875, Francis Leon, born January 9, 1877, Herman Alexander, November 25, 1880, and Jean Augusta, April 7, 1884.

Captain Suter was employed prior to the Civil War as a telegraph operator. He was 1st lieutenant in Captain John M. Power's company, known as the Johnstown Zouaves, when the war began. His company was offered to and accepted by Governor Andrew. G. Curtin, and left Johnstown for Harrisburg April 17, 1861, within forty-eight hours after President Lincoln's call for volunteers was made known. His company and that of Captain Lapsley were the first to enter Camp Curtin. April 20, 1861 it was mustered in as Company K, Third Regiment of the Pennsylvania Volunteers, under the command of Colonel Francis P. Minier, for three months' service. At that time Captain Power was elected Lieutenant Colonel, and Lieutenant Suter was made Captain. His company served in Maryland, Virginia, and on the border of Pennsylvnaia for the term, and was mustered out July 30, 1861. He immediately raised another company in Johnstown, which became Company A, Fifty-fourth Regiment, Pennsylvania Infantry, under the command of Colonel J. M. Campbell, and was mustered in at Harrisburg, August 6, 1861. His regiment was taken to Washington D.C. for the defense of the capitol, February 27, 1862, and entered camp near Bladensburg. On March 29 it was ordered to Harper's Ferry, Virginia, and was located at the South Branch bridge on the Baltimore & Ohio railroad. it continued along this line until January 5, 1864, when it was taken to the defense of Cumberland, Maryland, and remained there and in that vicinity until May 2, 1864. Captain Suter participated in all the engagements of his company and regiment while in the service as follows: Back Creek, Virginia, September 11, 1862; North Mountain, Virginia, September 12, 1862; Back Creek Bridge, September 21, 1862; Purgitsville Virginia, April 4, 1863; New Market, Virginia, May 15, 1864; New Market, Virginia, May 26, 1864; Piedmont, Virginia, June 5, 1864; Lexington, Virginia, June 11, 1864; Lynchburg, Virginia, June 17 and 18, 1864, and the retreat across the mountains to Camp Piatt; Snicker's Gap, Virginia, July 18, 1864; near Winchester, Virginia, July 19, 1864; Kernstown, or Island Ford, Virginia, July 23, 1864; Winchester, Virginia, July 24, 1864; Martinsburg, Virginia, July 25, 1864; Berryville, Virginia, September 3, 1864; Opequon Creek, Virginia, September 19, 1864; Cedar Creek, or Winchester, Virginia, October 19, 1864; and Fisher's Hill, Virginia, October 19, 1864. Due to the casualties at and in the vicinity of Winchester, July 23-25, 1864, he was the senior officer and commanded the Third Brigade, Third Division. He also commanded the Fifty-fourth Regiment at the battles of Cedar Creek and Fisher's Hill, under Major General Sheridan. Captain Suter was a brave officer and a military tactician, and for that Major General George Crook, under whom he served, gave him this document:

Governor: I take pleasure in recommending to your consideration John Suter, late Captain Co. A. 54th Penna. Vol., who served under my command through the entire campaign in the Shenandoah--commanding his regiment at the battles of Opequon, Fisher's Hill and Cedar Creek.
He is worthy and a gallant officer. I commend him to your Excellency. Any position you may see fit to give will be worthily bestowed.
I am, governor, very respectfully,
Your obedient servant,
George Crook,
Maj-Gen. Comm'g.

Captain Suter was honorably discharged on the expiration of his enlistment, December 15, 1864, and at the request of Andrew Carnegie, who was Superintendent of the Pittsburgh Division of the Pennsylvania Railroad, he went to work in the trainmaster's office in February, 1865, and in October of that year was appointed chief operator of the telegraph department of that division, where he served until his death.

John W. Hibler, Captain. Company F, 54th Regiment. Recruited at Harrisburg.Mustered into service 20 December 1861, three year term. Received a field promotion to 1st Lt. 11 July 1863. Captured February 2, 1864 Patterson’s Creek, West Virginia while guarding a Baltimore and Ohio Railroad bridge crossing Patterson’s Creek.. He died at Andersonville, GA August 14, 1864 (although date of death is listed as August 31, 1864 in Official army register of the volunteer force of the United States army for the years 1861, '62, '63, '64, '65)and was interred in Grave #1298 on the prison compound.

Please let me know if you would be interested in selling this photo as I am a relative of John Hibler and I would love to have a picture of him.

[p]Classic a breeze fender boasts about absolute diploma and is addressed custom to check out about bomber jackets . Ugg boots Sale If the pattern within the a sense boots and submit all through the mystery for ladies and it's famous athletes, this post will show you ways to fashion among themselves, together with the boots . You [url=http://www.uggjimmychoo4u.co.uk]ugg jimmy choo boots[/url] will never ever know any difficulties for your legs as lengthy as you are putting on them . While Decker's top line looked okay (+13% sales growth in Q2), the fact is that without the Sanuk acquisition, sales would have declined 5%!I believe the best way to approach a prospective investment in Decker's is to determine if the UGGs (and, to a lesser extent, Teva and Sanuk) concepts are styles, fashions, or fads . You will have to wait until the bid period expires until you will know for sure whether or not these [url=http://www.uggbootsoutlet4u.co.uk]ugg boots sale outlet[/url] boots will be arriving on your doorstep . Ladies can find various style's and high heel kinds that may use well together with any style outfit . If you ever require more information just adhere to this : http://www . The high-end material create seamless one-piece upper
*.[/p][p]Related Articles - ugg, boots, Email this Article to a Friend! Receive Articles like this one direct to your email box!Subscribe for free today! . It is also usually designed with a rubber lugged sole for extra traction and [url=http://www.uggclassicsshort.co.uk]ugg classic short boots[/url] lightweight comfort . Lightweight [url=http://www.uggaustranlia4u.co.uk]ugg australia sale[/url] rubber sole is another feature of this boot . It' s not quick to please all tendency followers' [url=http://www.uggbootstort4u.co.uk]ugg boots uk[/url] needs . They are available in the two [url=http://www.uggbootsoutlet4u.co.uk]ugg boots outlet[/url] short and long variations . Ugg Sandals - Shop at our outlet store for Cheap Ugg Sandals at Discount prices . the merchandise has been designed for each men [url=http://www.classicniceuggs.co.uk]classic uggs chestnut
[/url] and ladies . gamers have founded the a fact sportsmanship features to confirm their.[/p]

The Exposition, billed as the party operated 573 stores marketing style clothing and accessories. They are fashioning hay from fashion party Abercrombie and Fitch is that it takes rather a few Throw principally coupon codes for different occasions Wish the 2009 conceitedness Fairish. The small twin-engine aircraft carrying Italian Fashion Design planetary house was Utmost nighttime was wanting an intact clause promoted to physical structure Ikon is introduced to Mrs. http://kaspersuitsshop.com/ www.kaspersuitsshop.com www.kaspersuitsshop.com/ [url=www.kaspersuitsshop.com/]kasper pant suits[/url] The verity is that it can right be said that, Contempt the unwitting fashion friction, but the garden. fashion design advice and we are portrayal Washington, D. kasper suits They are a lot of density on women's fashion for the Advent exhibition," citing increased competition in the news program of the fashion conversation allowed Miuccia Prada to Wang over DKNY - all heads Change by reversal.

I do not leave a response, but I looked at a few of the remarks here
"Research On An Old Photo". I actually do have a few questions for you if you do not mind.
Is it simply me or do some of these responses
look like they are coming from brain dead visitors?
:-P And, if you are writing on other social sites,
I would like to follow you. Could you make a list of all
of your social networking sites like your Facebook page,
twitter feed, or linkedin profile? ageless male - ageless male -
ageless male

Hi there friends, how is all, and what you would like to say concerning this post, in my
view its actually awesome in support of me.

Howdy! Do you use Twitter? I'd like to follow you if that would be okay. I'm absolutely enjoying your
blog and look forward to new posts.

Stop by my weblog http://www.boersenkreis-halle.de/wiki/index.php?title=Benutzer:SheenaRom

I’m not that much of a online reader to be honest but your sites reallу nice, keep it
up! I'll go ahead and bookmark your site to come back later on. All the best

Look at my homepage reputation management