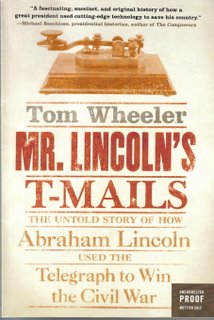 To be released for sale to the public on October 31st, 2006 is an interesting book that goes to an area of Civil War history that I, for one, hadn't really thought that much about.

"Mr. Lincoln's T-Mails: The Story of How Abraham Lincoln Used the Telegraph to Win the Civil War," by Tom Wheeler, is a really good book for those of us always striving to find literature on the lesser known aspects of the Civil War. Abraham Lincoln was fascinated by technical advancements (he's the only U.S. President to hold a patent) including what really was the Internet of that time period, the telegraph. We learn that Lincoln, after teaching himself the operations of the telegraph because of McClellan's refusal to allow some messages to be forwarded to the White House, would spend many hours in the War Department telegraph office, receiving ongoing news and dictating messages almost directly to the front. Wheeler takes a look how Lincoln used this relatively new technology to his advantage.

From the book:
"The telegraph had allowed President Lincoln and the War Department to have unprecedented awareness of and access to commanders in the field. The technology had, without a doubt, changed the nature of the command relationship."

The relationship between the Telegraph and today's email was an analogy that I found to be a catalyst for me to continue reading each day. The comparison between technologies both old and new was very interesting.

I found "Mr. Lincoln's T-Mails" to be an interesting book, an enjoyable read, and it allowed me to learn about an aspect of Lincoln's presidency that I really hadn't considered.

I place this book on the "Strike The Tent..." Recommended Read list.

"Tom Wheeler has been CEO of multiple high-tech companies, as well as CEO of the National Cable Television Association and the Cellular Telecommunications and Internet Association. Presently, he is a managing director with Core Capital Partners and a member of the boards of directors of numerous technology companies. He is the author of Take Command!: Leadership Lessons from the Civil War, named one of the Top Ten Historical Leadership Books, and his op-ed commentaries on the historical analogues to current events have been published in the Washington Post, USA Today, Los Angeles Times, Newsday, and other leading publications. Wheeler was appointed a trustee of the John F. Kennedy Center for the Performing Arts by both President Clinton and President Bush. He is chairman and president of the Foundation for the National Archives, the nonprofit organization dedicated to telling the American story through its documents, and a director of the Public Broadcasting Service."  ¶ 10/25/2006 08:41:00 AM